1 Core products go back to the roots of Groundsman Industries

Groundsman Industries celebrate two decades since the inception of their unique elliptical plunge action mechanism now used in their range of pedestrian and tractor mounting turf aerators which have carved a reputation for simplicity, performance and reliability.

Nothing stands still least of all time but it's hard to believe that it was twenty years ago since Billy Warke, the owner and designer of the Groundsman Turf aerator range laid out his plans for an aerator mechanism with would move the tines in two directions using only one crank-shaft. The tine movement was there-after described by Groundsman as an elliptical plunge action.

The resulting mechanism was simple and extremely compact lending itself perfectly to pedestrian machinery. Many improvements have been introduced to this patented mechanism over the years but the basic elliptical plunge action conception has remained unchanged.

The test of time

Groundsman Industries was established in 1990 to manufacture this product and has since extended the range to include tractor mounting surface and deep aerators, core collectors and a range of Turf Cutters. 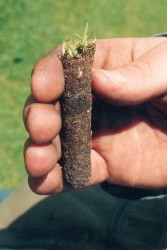 The Groundsman models 345MD and 345HD models are common with bowls and cricket circles and their big brother the 460HD is quite often found in the hands of contractors or councils who have a number of clubs to tend.

These machines have earned the reputation over the years for rugged reliability and low maintenance with the ability to get into the ground no matter what surface and are now recognised and used extensively in Bowling and Cricket Clubs throughout the UK, Ireland and beyond.

They have even found their way into general purpose aeration such as estates and gardens where anything can be encountered under the surface such as stones, bricks or old foundations, their rugged crank and shock absorbing construction enables them to cope in these conditions.

In 1995 the 1.5 metre tractor mounting aerator model 8120CTM was introduced to complement the pedestrian range. This was followed up two years later with the addition of the 1.8 metre swath model 12180TM machine. Collecting soil cores after aeration is a pain staking and time consuming job on any green-keeper or ground-persons calendar.

This problem was addressed by Groundsman with the introduction of the Flexblade Core Collector attachment. Fitted directly to the aerator machine, the soil cores can be collected as they are being produced. Core and collect in one pass. This extremely simple but efficient implement is now available as a stand-alone attachment for use on a compact tractor or turf utility vehicle.

The Groundsman elliptical plunge action range are classified as surface aerators, they treat the top 15cm (6") of soil. Groundsman are currently in their third year of intensive research and development to produce two more tractor mounting machines which will be capable of aerating down to 30cm (12") The new DT (deep tine) range will be available in 1.5 metre and 2.25 metre swaths. 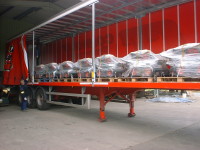 The model DT30150 (1.5 metre) will be available this spring and the model DT30225 (2.25 metre) machine by the end of the year. The highly successful Groundsman Flexblade Core Collector attachment will also be available to fit this range.

The Groundsman Industries website is continually being updated and has a wealth of information about the company, its products and a guide to their applications. Help and advice is available no matter what type of grass surface is being nurtured from the basic principals of aeration illustrated in the Aeration Quick Guide to the comprehensive Tine and Accessories Catalogue which give an insight into the versatility of the machines for new or existing customers.