by Graeme Cousins
in General Interest, Football, Golf, and Cricket
on 04 May 2020

0 Coronavirus: Grounds never looking better ... but when will they see action? 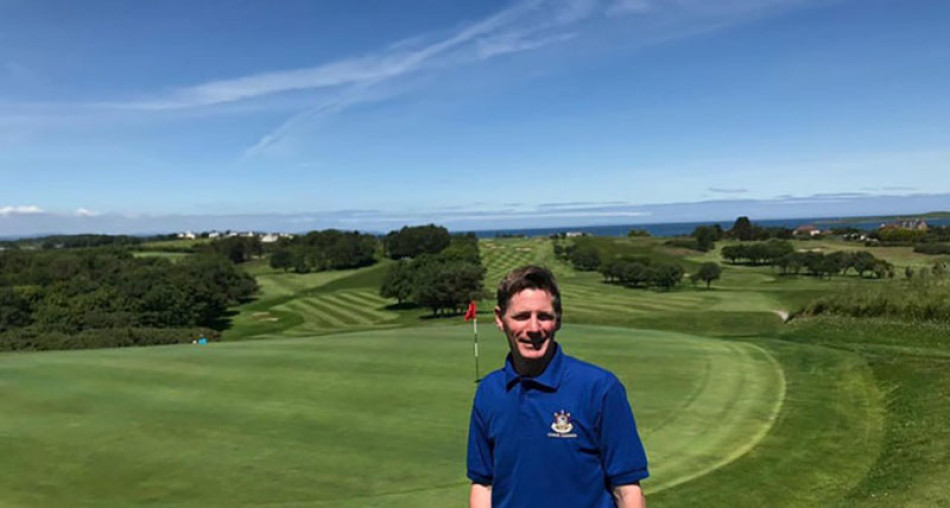 Grass roots sports, at least in name, have a dependence on the surface on which they're played.

That's why grounds maintenance across the Province has been deemed essential during lockdown - so that our golf courses, cricket squares and sports pitches are fit to play on again when it is deemed safe to do so.

One person with a bigger task than most is James Devoy, head greenkeeper at Donaghadee Golf Club where there is nearly 100 acres to maintain.

The 38-year-old, who lives in Glastry on the Ards Peninsula, makes a daily 28-mile round trip to maintain the golf course.

He said: "It's essential. If this wasn't being done the course would become overrun and unplayable. It would turn to pasture very, very quickly. It would be difficult to recover.

"Normally there's a team of five greenkeepers in total and a part-time guy, but three of them are furloughed at the minute and our part-time guy is off until we're back to normal ... if there is such a thing. There's two of us in to do it. It's a big undertaking. We've just under 100 acres here."

Asked if he was ever tempted to play the course given that he's the only one there, he said: "I'm not actually. We're being pretty strict at the minute, no golf at all.

"There's nobody allowed to play the course, there's people walking it every day, but there's no golf and there's no dogs. It's been more than four weeks since anyone has played the course. It could be ready to go as soon as the lockdown is lifted. We're maintaining the course to a high standard. The amount of people who have commented on the condition of the course being very good. We could open tomorrow if necessary. The only thing would be the greens mightn't be up to speed. A week would bring them back up to standard."

"The height of the greens are up. Our greens are at five mill, whereas normally at this time of year they'd be down to three. That saves the greens, it keeps them healthier because the grass is longer."

Asked if the dry weather has posed problems, he said: "It has a bit. It's good in the sense it's still a bit cold so the growth has slowed down a bit. But yes, the dry weather means we're watering greens several times a week.

"It just means we have to manage the greens a bit better, keep an eye on them."

James said the job of a greenkeeper was not normally an isolated pursuit, but it has taken on a more eerie feel recently: "When the course is busy with golfers you're seeing people all the time. You have guys who go out every morning at eight o'clock religiously. We know they're going to be on the course, and we adjust our work to keep ahead of them."

"At the minute, it's just the two of us. It definitely is strange, you're not having to plan your day around golf. You can do what you want when it suits you. It allows us to cut the rough a bit later. As any keen gardener knows it's better to cut your grass when it's dry and not first thing in the morning when there's dew on it." 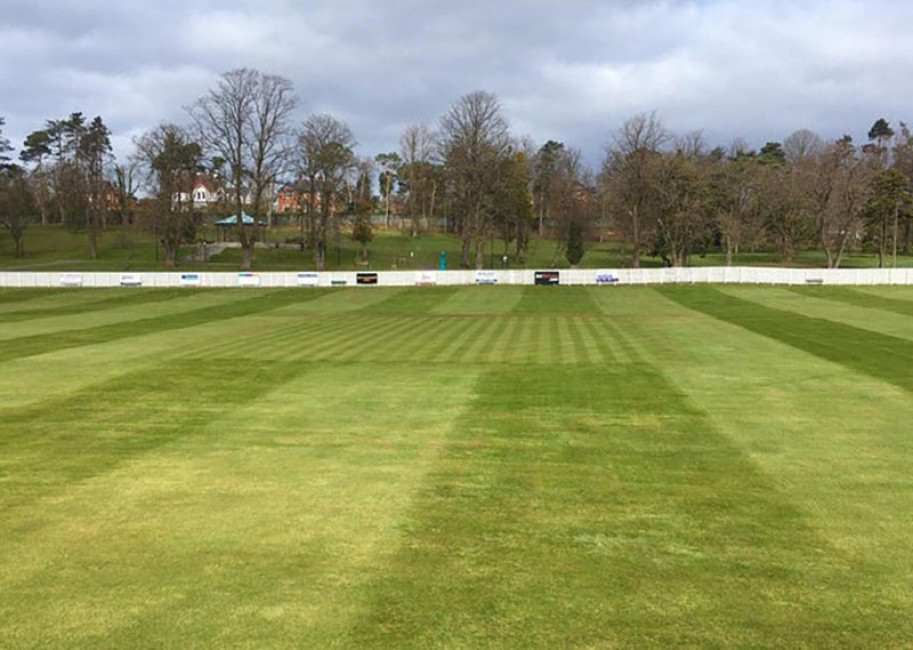 Wallace Park had been closed to the public while Dean Simpson tended to Lisburn Cricket Club's ground Copyright: Other 3rd Party

Up until very recently Dean Simpson was one of the only people allowed into Wallace Park.

The Lisburn Cricket Club groundsman was permitted into the park to carry out work on the cricket pitch while others were locked out, a situation that has since changed with parks being allowed to reopen across Northern Ireland.

Dean said: "It's a very, very eerie place when you're on your own. Normally it's very, very busy, there's a lot of footfall around the park."

Of the work being carried out, he said: "We're really just keeping a lid on things. We're cutting the outfield and keeping the square at bay. If it gets away from you, you'll never play whenever the doors open."

"Therein lies a problem because we have very little income. Senior members still pay their subs but we've 150 youth members and it's difficult to charge the wee boys subs when you've nothing to offer them."

"We've lost income there, there's no bar revenue, it's hard to go and ask sponsors for money given that they've their own difficulties. There's reduced income so you're just trying to do the basics to keep on top of things until, maybe, hopefully, this thing will lift in July and maybe allow a few friendlies."

"The danger you have too is if you lose the full season you might lose those youth members. You could also lose older ones coming to the end of their careers, who think it is a good time to retire. All in all, it's not going to be good for the sport if we have to go a season without playing. He said conditions are perfect for the start of the season. Despite the wettest February on record, we're now having the best build-up to a cricket season in terms of weather that I can remember."

"The grounds would be perfect for the start of the season. Normally you're running about trying to get covers on. From a personal point of view, the way things are going it's hard to see much cricket. I think whenever this lockdown is lifted it's not just going to be an open house where everybody is going to go back to doing what they were doing before." 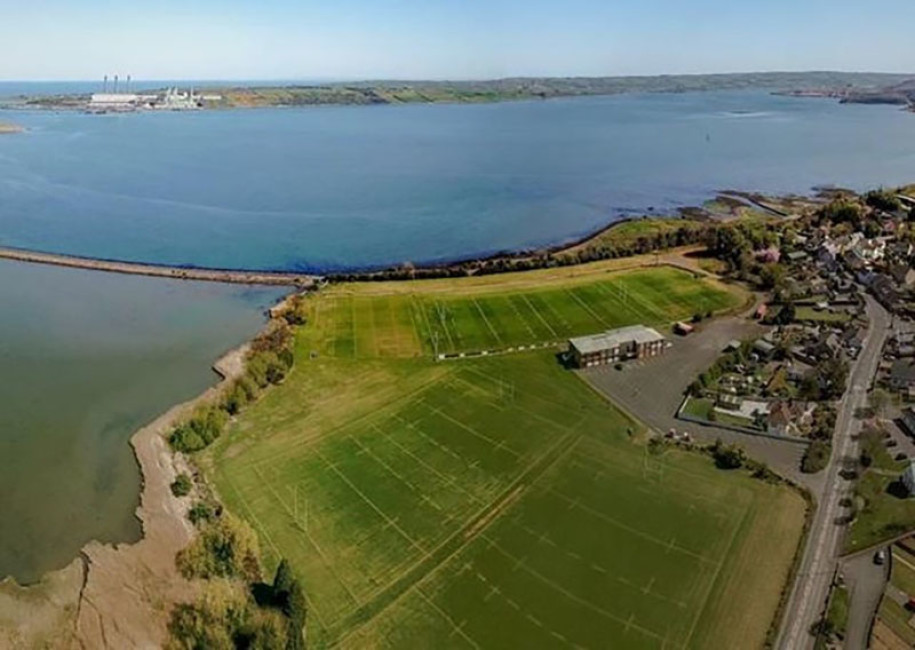 Normally at this time of year, Pollock Park in Lurgan would have been transformed from a rugby ground to a cricket one.

However, this year it's been a matter of playing it by ear for groundsman Kyle Geddis.

He explained that he was simply keeping things ticking over rather than carrying out any major work at the ground: "There's been no rugby played since the start of March, there's not going to be any cricket played for a good while, so the powers-that-be have decided there's no point spending six or seven grand if the pitches are going to be alright for the next season anyway. It could be September before they're played on again. We don't know."

Kyle, one of three groundsmen, said: "The work we're doing is fairly straightforward. We fertilised the pitches last week and the grass would be cut once a week just to keep it down.

He added: "The one consolation if there's no cricket season would be that we don't have to take the lights and the posts down.

"Though if it needed to be turned around it would only take a day to do it. The square is in good nick. It was reseeded at the end of last season."

The club is one of a number of sporting organisations in the Lurgan area, who as part of Lurgan Aid Group, are putting together care packages every week to be delivered to those who need them in their communities.

Davy Wilson is one of the volunteers helping to keep Larne Rugby Club in pristine condition.

He said: "We've about 18 acres here. There is four or five of us who do it all voluntarily.

"They come out different days and if they're ever out together they're more than two metres apart. They're able to work away isolated. We're totally self-sufficient looking after the grounds. We don't get any financial help from the council or other bodies."

"We always have them pristine. There's three pitches and two training areas plus all the surrounding areas plus the clubhouse. There's a lovely setting here by the lough."

He added: "I remember my first season here there was a silage harvester going round and the grass was about three foot tall when you were doing pre-season training. Times have moved on. 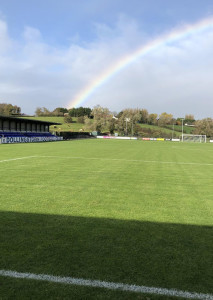 "I wouldn't say it's helped or hindered having no play on the pitches. There wasn't long to go in the season. We've always worked at them rain, hail or shine so whether or not there's play on it doesn't make a difference to what we do."

Hubert Watson has been president and chairman of Dollingstown FC, but that doesn't mean he's shy when it comes to tasks like watering the goalmouth.

He's been busy at Planter's Park during lockdown maintaining the pitch for the Premier Intermediate League club.

He said: "Once I knew that it was going into lockdown in mid-March, I contacted Clive Richardson who does all our ground works during the close season. We'd already scheduled him for the end of May to do the work, which gives us June and July to allow the grass to grow. I gambled and I went ahead and did it in March."