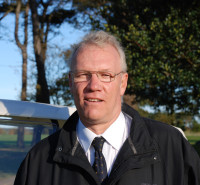 Overlooking the breathtaking splendour of both Alnmouth Bay and Foxton Bay, Alnmouth Golf Club boasts one of the finest golf courses in the north east of England. They have recently taken delivery of a fleet of eight E-Z-GO TXT golf cars, powered not by petrol, but by LP Gas.

Managing Secretary at the Club is Hamish Sutherland, who firmly believes that LPG is the way forward when it comes to buggy operations and improving the bottom line.

"Our previous golf cars were petrol, in fact we still have a few on the fleet, but these will be phased out over time. I hadn't considered going down the LPG route until David Common of our local dealer, Rickerbys, proposed the idea and suggested that I speak with the people at Beamish Park, who were using LPG golf cars.

"This convinced me the idea had some merit, so we explored the options with increased interest. The difference in fuel costs is hugely significant and there are the health and safety issues associated with the storage and transport of petrol. These were the main influences on our decision in favour of LPG.

"We have seen the fuel cost for a round plummet from 87p to 37p, so that's a huge decrease in cost and we're transporting and storing significantly less petrol. We've had to educate members in the use of the cars; it's slightly different from the petrol versions, but apart from that there are no other issues. We fuel up on Mondays, Wednesdays and Fridays during the main season and make sure we rotate their use. Rickerby's have been very helpful during this changeover process and I'm sure that it won't be long before we have migrated to an all-LPG fleet."

E-Z-GO Textron is a division of Textron Inc., a $13.2 billion multi-industry company operating in 34 countries with approximately 44,000 employees. The company leverages its global network of aircraft, industrial and finance businesses to provide customers with innovative solutions and services. Textron is known around the world for its powerful brands such as Bell Helicopter, Cessna Aircraft Company, Jacobsen, Kautex, Lycoming, E-Z-GO, Ransomes, Greenlee, Fluid & Power, Textron Systems and Textron Financial Corporation. More information is available at www.textron.com.