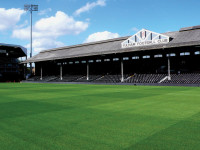 Early in 2010, Fulham Football Club took the decision to install an undersoil heating system on its Craven Cottage pitch. This followed a succession of match postponements caused by a frozen pitch or heavy snow cover during the previous few seasons.

Whilst the club had made use of an inflatable cover for the pitch, this was not entirely successful and was relatively labour intensive to operate. The loss of fixtures and potential income conflicted with Fulham's Premier League status, where clubs are required to provide an undersoil heating system or another system of pitch protection approved by the Premier League board.

Following discussions with STRI's Stadia Services, a programme of work was agreed for redeveloping the pitch, in which the existing upper profile would be removed, facilitating the installation of the pipe work for the heating system. The removal of the existing fibre reinforced upper rootzone also presented the opportunity to update the pitch's surface reinforcement, with the introduction of a 'Fibrelastic' rootzone as produced by the Mansfield Sand Company Ltd.

The construction of the Craven Cottage pitch is unique in the UK, in that it is based on a type of profile known as the 'Cell System', which was installed at the stadium in the early 1980s. This type of construction comprised a coarse sand based profile, the sides and base of which were enclosed within an impermeable membrane. A series of perforated pipes was laid on the pitch base above the membrane, after which the sand rootzone layer was added. The outlet for the pipe system was connected via a two-way valve arrangement so that, during the wetter periods, water collected by the pipes could be drained off to a suitable outfall.

Conversely, during the drier summer months, the valve position could be changed so that water could be fed back into the pipes, enabling water to percolate into the base of the rootzone and, theoretically, support normal grass growth. 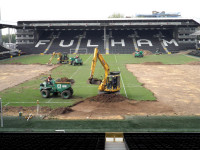 With this concept, the requirement for a conventional irrigation system was considered unnecessary, owing to the sub-surface wetting of the profile. However, once brought into use, it soon became apparent that sub-surface watering of the pitch was not achieving the required results and, ultimately, a conventional irrigation system had to be installed in order to support normal grass growth on the very free draining profile. In addition, surface stability became an issue where the grass cover was lost owing to the coarse sand nature of the pitch construction.

Initially, this was overcome by capping the Cell System profile with a layer of imported topsoil, approximately 150mm deep. This helped provide a more stable playing surface, as well as a sustainable grass cover on the pitch. However, a major consequence of capping the profile in this manner was that surface drainage was impaired when compared to the original pure sand construction. 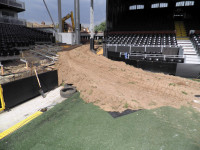 Owing to the shortcomings of the modified Cell System construction, STRI was appointed in 2001 to design a scheme for undertaking a major refurbishment of the pitch, the main purpose of which was to introduce a completely new pipe drainage system, as well as a fibre reinforced upper roozone.

As part of this scheme, new lateral drains were installed, these running across the width of the pitch at 6m centres linking up with the existing drainage outfall. The introduction of these drains effectively replaced the original pipe drains associated with the old Cell System.

As part of this process, the existing capping layer of topsoil was retained, and gravel slits were cut through this at right angles to the lateral drains at 750mm centres and to a depth of 200mm. The slits provided porous channels through which water could be rapidly transmitted through the topsoil capping layer into the underlying sand.

Above this, a 150mm layer of medium-fine rootzone sand was placed, and the new pitch profile was completed with the introduction of a 100mm fibre reinforced rootzone layer. The new construction obviously raised the overall level of the finished pitch surface, and appropriate adjustments were made around the outer edges of the pitch, with the formation of embankments down to the front elevations of the adjoining stands.

This refurbishment helped restore a more conventional pitch profile that performed satisfactorily for the remainder of the decade, apart from the problems caused by the absence of an undersoil heating system. The only trace of the original Cell System construction remaining was the pure sand lower profile beneath the topsoil capping layer. Subsequently, the sloping outer natural grass edges of the pitch were replaced with a 3G synthetic turf to reduce their management requirements. 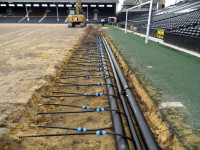 Works commenced on the latest upgrade to the pitch on 7th May 2010, and the appointed contractor for the pitch redevelopment was Premier Pitches, with Pitch Heating being employed, under a separate contract, for the installation of the undersoil heating system.

The initial requirement was to establish an access route onto the pitch for the passage of machinery and materials on and off the site. The tight confines of the Craven Cottage stadium meant that there was only one possible access route that could be gained, between the Hammersmith and Johnny Haynes stand at the northeastern-most corner of the pitch. This necessitated the temporary removal of some of the adjoining seats, whilst the main access route was protected by the placement of plywood sheeting, covered by some of the reinforced rootzone material removed from the pitch.

Two tracked 360° excavators were brought in to strip off the existing turf and upper 100mm of rootzone, that included the old polypropylene fibre reinforcement. The remaining lower rootzone sand was then laser graded in order to achieve a more consistent playing surface. The original pitch surface had a ridge back type formation, resulting in a 100mm fall from its longitudinal centre line to each wing, and this overall grade was retained as part of the redevelopment.

At the northern and southern ends of the pitch, a deeper 1.5m wide trench was excavated, up to 400mm below the finished pitch surface, to accommodate the flow/return pipework and connection points for the new pitch heating system.

Once the exposed sandy rootzone had been trimmed, the next stage was the introduction of the heating system, commencing with the laying of the header/return pipes at the southern Putney end of the pitch. The below pitch pipe work could then be mole ploughed into the profile, running along its length at 250mm intervals and to a depth of around 250mm below the surface.

Following connection of all the pipework beneath the pitch, pressure testing was undertaken to ensure that there were no leaks in the system. Any surface disturbance caused by the installation of the pitch heating pipes was then restored by trimming with a tractor mounted stone rake.

At this point, the Fibrelastic reinforced rootzone was introduced, supplied as a pre-prepared mixture containing polypropylene and polyurethane fibres, which was spread to a finished depth of 100mm over the entire pitch area using a Raycam drop spreader.

Once all the upper rootzone had been spread, the fibres were further uniformly distributed by cultivating with a power harrow, and the final finishing off was completed by making multiple passes with the stone rake attachment.

Following final seedbed preparations, final seeding of the pitch was achieved by 22nd May, just two weeks after the commencement of works.
Aftercare

Once the pitch contractor had cleared the site, management of the new pitch surface became the responsibility of Head Groundsman, David Fellowes. One of his first tasks was to cover the pitch with germination sheeting to accelerate the initial g 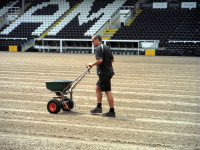 rass establishment. With the combination of the sheeting and continued warm summer weather, there was a good initial take of the young grasses, despite the attentions of the local pigeon population and resident fox.

During the remainder of the summer, regular mowing resumed on the pitch, initially using rotary mowers and, later on, the normal pedestrian cylinder machines.

Owing to the relatively short turnaround for the pitch redevelopment, the new surface was afforded the luxury of a twelve week establishment period before the first match, a friendly against German side Werder Bremen on 7th August.

The first home tie of the new 2010/2011 season was against Manchester United on 22nd August when Fulham managed to earn a 2-2 draw, and even Sir Alex Ferguson was complimentary about the quality of the new pitch surface.

Since then, the pitch has continued to perform well and, with the provision of the undersoil heating and the benefits of the Fibrelastic reinforcement system, Craven Cottage now provides an excellent playing surface befitting Fulham's Premier League status.