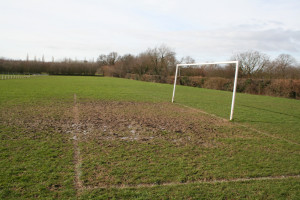 Council-run football pitches used by thousands of amateur teams each week are in an "abhorrent state", the Football Association has told the BBC.

The future of the game is under threat unless there is a move from grass to artificial pitches, the FA told Radio 5 live's Victoria Derbyshire programme.

Pitches are not only waterlogged after heavy rain but are also suffering from overuse in many cases, the FA says.

About 80% of amateur football is played on council-run grass pitches.

Many pitches were once heavily subsidised, but a squeeze on local government budgets has meant the cost of hiring them has often gone up - in some cases by as much as 300%.

But the increased fees have not always led to improved facilities, with some pitches poorly maintained and suffering from use for multiple games.

"Football has had a huge subsidy for so long - now local authorities have tough decisions to make."

Synthetic pitches are also much more likely to be floodlit, for play on winter nights, said Mr Ackerley.

In January, campaign group Save Grassroots Football urged clubs across the country to refuse to play their matches in protest about the rising costs of hiring poor-quality pitches.

Many games were abandoned anyway because of rain.

Campaign organiser Kenny Saunders, who runs Woolton FC in Merseyside, told the Victoria Derbyshire programme: "We've had nine games called off in a row on pitches that are overpriced and not suitable for football anyway.

"If a child missed nine weeks of school, they'd fall behind. It's no wonder we're falling behind in football."

One club that says it has been affected by poor facilities is Rockleaze Rangers FC in Bristol, which claims a lack of good-quality facilities means local youngsters are being turned away.

An under-14 at the club said he was jealous of Spanish youngsters, who rarely play on grass, enabling them to "learn from a young age to play well".

The club said it had regularly had funding applications for an all-weather surface rejected, and was currently playing on pitches with an uncertain future.