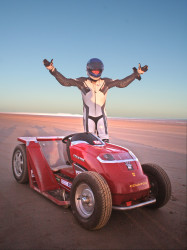 On Saturday 22nd May, the Countax Runningblade mower broke the record for the World's Fastest Lawnmower, by travelling at 86.069mph at Pendine Sands in Wales.

The old record, held by Bob Cleveland from the USA, had stood by 80.792mph since 2006, and Bob had flown to the UK especially to witness the record being broken.

The mower was driven by Don Wales, grandson of Sir Donald Campbell, and nephew of Malcolm Campbell, who between them broke over 20 World land and water speed records. Don now holds 9 UK land speed records including the World Record for a Steam car at 148mph on Edwards Airforce base, California in August 2009.

The team returned to the sands on Sunday, determined to extend the record further, and successfully achieved a new World Record of 87.833mph, before the surface of the sand deteriorated, preventing any further attempts.

Proving himself to be a good sport, Bob Cleveland commented; "I'll really pleased for the all the guys at Countax, they've built a great mower, and given me a new target". When asked whether he will be challenging the new World Record, Bob said that he was certainly going to try, but the new record of almost 88mph was going to be very hard to beat.

Countax Managing Director, Harry Handkammer said; "I'm very proud that we have taken the record, the team at Countax have worked so hard on the mower, and it's been a real pleasure to be here and share in the excitement".

Countax manufacture a range of ride-on mowers at their factory in Oxfordshire, producing over 10,000 mowers annually.