0 County winner of FA Groundsman of the Year Award announced 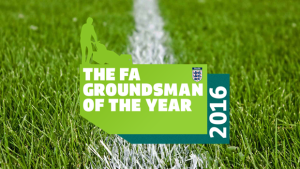 Freddie scooped the top prize after the pitches at the The Cheshire County Sports Club were deemed to be a cut above.

The Upton AA groundsman has now been put forward to the FA who will send a representative to visit the site and judge his work in the national groundsman of the year award category for Step 7 and below clubs.

This year's Cheshire FA Groundsman of the Year Runner-Up place was awarded to Brian Deeley from Knutsford FC and Third place was given to David Oates of Styal FC.

The FA Groundsman of the Year Awards county winners will be recognised at Cheshire FA's 2016 Awards Evening on June 3 at Carden Park, alongside the presentations to the recipients of Cheshire FA Awards, FA McDonald's Community Awards and FA Long Service Awards.

The Awards were set up to recognise the contribution of these 'unsung heroes', who work in all weather, all year round, to make sure that thousands of matches can take place on a high standard of playing surface.

Cheshire FA Chief Executive, Simon Gerrard said: "The hard work and dedication of Groundsman is something that is often overlooked so it's brilliant that they have the opportunity to be nominated for awards, especially when they are mainly volunteers.

"Freddie Brickland is a worthy county winner of the FA's Groundsman of the Year for 2016, he works tirelessly to keep Upton AA's pitches up to a very high standard and should be seen as a role model across the county for all his efforts."


For the original article, visit www.cheshirefa.com.