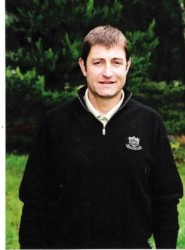 Dedicated work by Enville Golf Club's course managerJohn Wood, and his staff has seen them win the Midlands Regional prize of the 2008 British and International Golf Greenkeepers Association.

It is a feather in the cap of Wood, who was appointed course manager at the prestigious Staffordshire course only three years ago.

He said: "Obviously we are very pleased in view of the strong competition in the area.

"I understand that some 200 clubs were involved and to come out on top is a great reward for the work put in by the staff."

As Midlands Regional winners Enville now go into the national final consisting of just four courses for the number one award of the season.

Enville's prize was achieved on the back of highly favourable comments from the Ecology and Environment Department.

The club was informed that its heathland and woodland course offers a high quality of playing experience both in terms of the strategic element coupled with the considerable efforts undertaken towards promoting wildlife within out of play areas.

Sizeable heather trials, with the support of Natural England, have also produced pleasing results at Enville.

The policy to keep water fertiliser and pesticide applications at the absolute minimum makes it clear that Enville appreciate the environmental impact such measures have on the club area.

For the last two seasons Enville have been honoured to stage a qualifying round for the Open.