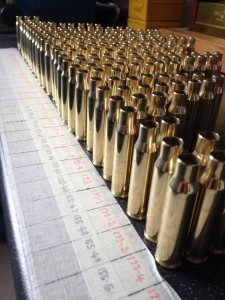 Ian Chenery has worked at Woodbury Park for 21 years and has held his current position of course manager for 11 years. He has always had an avid interest in shooting ever since his dad bought him his first air rifle at 13.

Over the years he has carried out all the pest control on the golf course and on many local farms. Ian used to get bored at shooting close targets as he found this very easy. Over the years he tried out many forms of shooting but, in the end, he found he was more suited to longer distant rifle shooting and decided to test himself at the very highest level.

F-Class is the formula one of shooting disciplines. It is long range shooting out to 1100 yards or one kilometre, shooting at a bulls eye (or V bull) only 5" in diameter - that's trying to hit a CD at a kilometre!

The national league is shot over 3 ranges, Blair Atholl in Scotland, Diggle in Yorkshire and Bisley in Surrey. Each competition is shot over 2 days and 5 separate rounds with 8 league matches per year. Due to his performance in the league, he was selected for Great Britain trials at the beginning of the year.

Ian has done very well in training and has now been selected as one of 8 shooters in the 16 man national team.

The sport is based on high precision, using very specialist top spec rifles that and are among the most accurate in the world. The ammunition he uses is handmade; each and every round is separately put together by Ian. The ballistics side of the sport is very technical with months of tuning then fine tuning rounds that fit the harmonics of each of his two Dolphin F class rifles, making an extremely accurate shooting system.

Everything is weighed, trimmed, and measured to the thousandth on an inch.

The GB team is in training for the up and coming world championships which is being held in Ottawa Canada in 2017. There are high hopes that F-Class will be part of the next Commonwealth Games in Australia, in which Ian is hoping to qualify.

Anyone interested in shooting at this level can find out more on the G.B F Class web site.