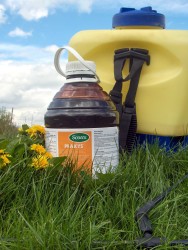 Course Managers have reported superb results after using Praxys, the new selective post-emergence herbicide from Scotts which kills turf weeds in one hit.

It combines the three most powerful active ingredients on the market, Florasulam, Fluroxypyr and Clopyralid, to wipe out weeds on golf courses, sports and amenity turf and lawns in one application.

Suitable for use on established turf between March and October, it enters the foliage rapidly, becoming rainfast in one hour before spreading through the whole plant ensuring total destruction.

Dave Horn is the Course Manager at Sittingbourne Golf Club and has been actively involved in conducting trials of Praxys: "We've actually trialled the product over quite a large area, almost one hectare, and the results have been extremely positive," he explained. "To start with, it is very easy to mix which makes the job of applying it more user-friendly. We followed the label guidelines for recommended application rates, which are lower than the alternative chemicals we used, and this has produced exactly the results we were led to expect.

Praxys wiped out all of the weeds listed including White Clover, Dandelions and Plantain, but in addition we noticed it also had a dramatic effect on Yellow Suckling Clover, despite it not being a recognised product for the treatment of that particular weed."

Praxys was developed to target common weeds like daisy and dandelion and it completely kills more problematic ones such as Self-heal, Ribwort Plantain and Spear Thistle.


The extremely low dose rate, from one litre per hectare, is flexible depending on the weed spectrum to be controlled. Low dose means less packaging and less waste and because only one application is required, it also makes Praxys the most cost-effective option available.

Dave Horn continued with his assessment: "We sprayed back in April and have not seen any re-growth at all. The results have shown just how effective it is after just one application. To my mind, this really is a 'big step forward'. I've no doubt that based on what we've seen so far, we'll definitely be using Praxys in the future."