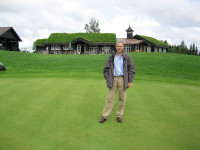 Course Managers from across Europe are demonstrating the lengths they're prepared to go to in order to produce top quality golf courses - by importing premium quality turf from Tillers Turf.

Tillers specialises in growing fine turf for golf courses at its nurseries near Lincoln, growing up to four million square metres at any one time. They're currently the only UK turf grower supplying specialist turf to golf courses overseas.

John Coleman is the Consultant at Miklagard Golf Club in Norway and has been there since its construction and subsequent opening in 2002. As one of the pioneers of the modern boom in Norwegian golf, Coleman has learnt a thing or two about how to cope with the short playing season and extremes of temperature. The annual scrutiny of the greens in Spring to see what damage has been wrought underneath the winter snow covering is something of a heartbreak in Scandinavian countries, but last year Coleman and Head Greenkeeper Ian Ross decided to do something different, something bold.

"In April this year we saw the usual winter-kill on the greens," remembered Coleman who continued, "Before this year we've returfed using our own turf but this time it wasn't mature enough and we didn't want to seed as we'd tried that before and it was disastrous. So this time we decided to buy in some creeping bent turf grown on USGA rootzone from Tillers Turf in the UK."

Not only has the importation of turf been successful in terms of finance at Miklagard, it has also been an agronomic success. "We bought the turf in from the UK because we just can't get the quality of turf that we need here in Scandinavia. We had to play on the greens straight away, there was no time to let it grow in as normal - we just laid it and cut a hole and away we went. It was perfect and we suffered no adverse effects - a lot of clubs in the UK could learn from this…but I can't claim to be clever, it was a case of necessity being the mother of invention."

In June 2006 the European Mid Amateur was played at the Grand Ducal Golf Club in Luxembourg and it rained. It rained a lot and the old putting green was, in the words of Course Manager, Leslie Cain "Absolutely murdered." A big decision - to completely rebuild the putting green - was taken with the idea of using it as a role model with the intention of returfing the greens out on the course.

Cain explained why he called in Tillers all the way from the UK; "I've dealt with companies in Belgium and Holland but I've not got the same quality as I get from Tillers. In fact, I was working with one of the biggest turf growers in Europe but the quality wasn't great. I heard about Tillers from a friend in Scandinavia and he recommended their turf so, having discussed what I wanted to do with them, I set about the work." Once Cain was ready for the turf he placed an order on a Thursday and the turf arrived in refrigerated lorries the following Tuesday.

Was the turf what he had hoped for? "It was great, absolutely first class, everything about it was spot on." Cain enthused before going further, "I needed a fescue/bent mix but so often in the past I've received turf that was mostly Poa Annua - not so with Tillers. I would recommend them to anybody and I will definitely buy from them again."

With the putting green being down for about a month, Cain was thrilled with the progress so far - "Had I laid this green in the Spring, I would have had it in play in no time." 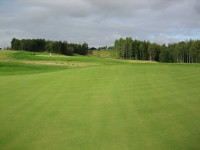 At Golf de Saint Nom La Bretèche, Versailles in France there is a rolling programme that sees two or three of the 36 greens being rebuilt every year. Course Manager Bill Warnick oversees the work and has, by and large, used his own turf to provide a quality sward.

"This year" said Warnick "it didn't quite work out and we just didn't have enough turf. I found Tillers Turf on the internet - there are very few suppliers of that type of turf [creeping bent turf grown on USGA rootzone] over here."

For Warnick and the prestigious courses at Saint Nom La Bretèche, quality is the key issue with any decision making process and Tillers did not let him down, "It wasn't a problem getting the turf from the UK - no different from ordering from a continental European country. Lead times? How long does a truck take to cross the channel? It was next day delivery and the turf was delivered in excellent shape. We put it down in -5ºc, so not ideal, in fact it was scary, but it all worked out. I was happy to recommend Tillers to another golf club over here and they ordered even more turf than I did."

Tillers' rootzone turf for greens is grown on 100% USGA sand and sown with 50/50 bent and fescue, giving a predominantly bent grass sward at maturity. It's grown for a minimum of a year and during that time, it's mown at 6mm and top-dressed with USGA sand. Creeping bent turf mown at 3mm is also available, sown with a 50/50 blend of Penn G-2 and G-6 for fast, true putting surfaces.

Launched this year and proving a popular choice is 100% fescue turf. Grown on very sandy topsoil, almost like dune sand, it's ideal for links courses. Tillers also offer fine, hard wearing turf for tees with or without ryegrass. Using only the best cultivars, it's grown on a sandy topsoil to allow free drainage of rain and irrigation water into the rootzone below.

Tillers Turf is one of just four growers in the UK currently producing RTF (Rhizomatous Tall Fescue) turf. It's hard wearing and has the ability to thrive under adverse conditions. Ideal for bunker banks and paths, it can send its roots down to 1.5m.

The company offers a high quality laying service, with optional laser grading for tees prior to turfing. Turf can be supplied in both large and small rolls.