Two years ago, 11 of the Ryder Cup matches that decided the Miracle - or Meltdown - of Medinah went all the way to the 18th hole.

Let us hope that at least that number reach the same point this time around so Gleneagles can properly showcase its crowning glory, the stunning amphitheatre surrounding its par-5 finish. 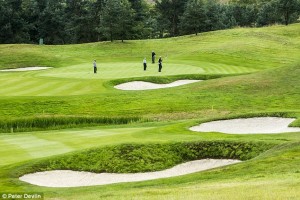 Like a lot of features of the PGA Centenary Course this construct is not entirely natural but it will nonetheless provide a spectacular climax. More than 50,000 tonnes of earth have been excavated to alter the original design, elevating the tee and lowering the fairway to provide a dramatic, banked setting around the relatively tight green.

There are 45,000 spectators expected on each of the three match days, and many of them will pack onto the hills that line the final 240 yards of what is Scotland's longest inland course.

It may feel a somewhat lonely place for an American golfer given the make-up of the gallery, although in many respects the visiting team should feel relatively at home here, even if the late September weather could be very unFlorida-like.

It was Jack Nicklaus who designed the layout of a course that was opened in 1993, and this is one little corner of Scottish moorland that has plenty of hints of its American creator.

Although nestled in glorious sweeping countryside that unmistakeably Perthshire, the relatively generous fairways, large man-made bunkers with golden sand, plenty of water and greens equipped with undersoil heating mean that it will not feel entirely alien to Tom Watson's visiting team.

Not that Paul McGinley, from his 25 preparatory visits to Gleneagles, has forgotten to ensure that there will be facets of it more tailor-made to his players for home advantage.

'Paul told me he wants a slightly tougher set up of a standard European tour course,' said Head Greenkeeper Stephen Chappell. 'There will be a premium on accuracy rather than distance.'

Chappell has planned for the rough to be 'juicy', while the Stimp reading will be closer to eleven rather than the more accustomed thirteen, as the Americans are perceived to prefer quicker greens.

'We have introduced a number of extra swales, as Paul is confident that the Europeans are more inventive around the greens,' added Chappell.

At the unveiling of his Captain's picks in New York earlier this month Watson summarised Gleneagles as a 'a good golf course, a straightforward golf course', and from his own regular visits to Perthshire feels his men will be equally equipped for it.

For the full story click Mail on Line here