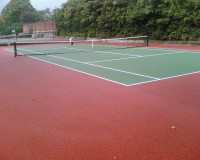 A new tennis court represents a major investment whether it be funded by club members, schools, individuals or external funding bodies. In many cases, it can take years of fundraising and involvement with planners and consultants before the dream of a new court becomes a reality. Then that magical day arrives when the contractor hands the new, or refurbished, facility over to the client.

From that point onwards, the client has a duty to himself, and to all those that have contributed to the project, to protect the investment. This is done through regular maintenance and inspection of the courts and the enforcement of do's and don'ts to court users. If the correct maintenance procedures are not adopted, years can be taken off the life of a court surface. It is also important to remember that an installer's guarantee is usually conditional on the surface being regularly maintained by the owner.

The maintenance procedures on a tennis court depend on the type of playing surface and the owner should have included an annual maintenance budget in his costings at the early stages of the project.

This is the most popular type of court in Britain. The benefits of this type of surface is that it drains well and can be played on in most weathers all year round. It's also relatively long-lasting, with a life expectancy of about 10 to 12 years.

Maintenance of a new court is quite simple. The most basic requirement is to keep th 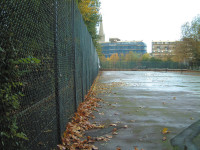 e surface clean. Leaves, tree blossom, pine needles and other organic debris are common contaminants on tennis courts. They must either be swept or vacuumed off before they begin to rot down and block the interstices of the macadam, reducing porosity. This type of contamination can also cause the court surface to become slippery. The courts should also be pressure washed about once a year to remove any surface film of organic contaminants.

Another common problem is moss and algae growth which can make the surface slippery. The contractor will advise on suitable treatments to kill moss and algae. If the surface starts to soften in hot weather (this can happen in the first one or two seasons), stop play immediately. In cold weather, chemicals should not be used to remove snow and ice. Be patient and let it thaw. If the macadam starts to 'fret' (loss of aggregate), inform the installer immediately. Make sure you have rubbish bins near to hand and close the gate when the court is not in use.

The same maintenance applies for paint coated porous macadam courts. The owner should be aware that the slip resistance of the painted surface will decrease with age. If players complain about the slip resistance (commonly under damp or wet conditions), pressure washing can help. The required level of slip resistance is stipulated in the SAPCA Code of Practice for the Construction and Maintenance of Tennis Courts.

Subject to the courts being properly maintained, the court should satisfy the slip resistance criteria for at least twelve months following painting. An acceptable performance from coatings may typically be expected for three or four years if the court is used for its intended purpose and is maintained 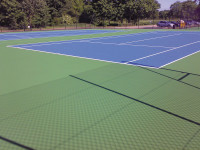 properly. The porosity of the macadam decreases after each re-paint of the courts. It is a high risk strategy to clean the courts 'in house' using a high pressure water process as the paint coating may be dislodged from the surface.

This type of surface consists of an acrylic paint coating applied onto a dense macadam surface.

The new surface should be swept or vacuumed of any leaves and organic matter. A regular inspection of the courts is essential and any cracking or crazing must be reported to the installer immediately. If water permeates between the acrylic paint and macadam, delamination can occur. The entire court should be thoroughly washed about twice a year using clean water and a soft bristled broom although there are specialist companies who can pressure wash the surface with specialist equipment which can make the surface look like new.

An artificial grass court usually comprises a tufted synthetic carpet laid onto a porous macadam base. Once the carpet has been installed, the pile is filled with specially graded, kiln dried sand.

As with macadam, the artificial turf surface has to be kept clean and free from leaves and organic deposits. A vital operation is to regularly sweep or 'broom' the surface to keep the pile upright and the sand agitated and evenly distributed. If the surface is not swept at least weekly, the pile and sand will compact. Sand levels should be checked regularly and the installer contacted if the level drops.

Weeds often appear on artificial grass surfaces and can be pulled out by hand or treated with domestic weedkillers (check with installer first). Surfaces can be given a new lease of life by the removal of a proportion of the sand and replacement with new by specialist companies. This improves appearance, porosity and playing characteristics.

Clay is a porous water-bound surface consisting of natural crushed stone, brick, tile or a combination. The traditional type of clay typically seen across Europe is known as Continental, European or Red Clay. There are also American Clay, Fast-Dry or Green Clay based on the same principle of construction, using local materials and derived from naturally occurring green stone.

This type of court is labour intensive to maintain and the Groundsman's skill and judgement often play a big part in successful maintenance. The maintenance process is a mixture of watering, brushing and rolling. The clay surface is readily displaced during play, which is the nature of the surface. It is therefore essential that any holes in the surface are immediately filled in.

A flat bladed rake called a 'loot' is kept on the court and players must be encouraged to fill holes and loot the surface for the next set of players. New clay courts take some time to consolidate, and vigorous play and competition should be avoided on new courts. Check the line marking tapes for displacement and nail loss.

Traditional clay courts need to be decompacted and partially rebuilt at the start of each season. This can vary according to the type of clay used, the installer must be consulted. 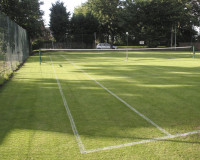 There are still grass courts around the country, but not so many are installed these days. The LTA have guidelines on their maintenance and, in general, they are in play from mid May to around mid September. The cost of maintenance is high and particular attention has to be paid to grass courts pre-season, so that a presentable surface is available prior to the start of Wimbledon fortnight! Bald patches in high wear areas such as baselines occur, so maintenance throughout the season must continue. This is again one for the experienced Groundsman.

The importance of maintaining your court cannot be emphasised enough. SAPCA have produced a Code of Practice for the Construction and Maintenance of Tennis Courts. This code, which contains detailed maintenance advice and a list of specialist tennis court contractors and consultants, can be freely downloaded from the SAPCA website www.sapca.org.uk. The installer's maintenance advice for your court should also be followed and will be contained in the handover documentation.


About the author: Bob Froud is a Senior Consultant at Materials Science Consultants and its associated company, the Centre for Sports Technology. Bob has almost thirty years experience in court, pitch and athletics track construction and refurbishment projects.