by Matthew Campelli
in Football and Rugby
on 19 May 2016 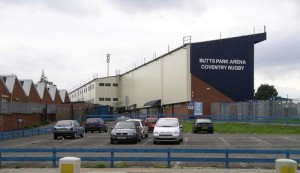 Coventry Rugby Club is currently exploring the possibility of expanding its current Butts Park ground into a 15,000-25,000 capacity stadium which can be used by both clubs.

John Sharp, chair of the rugby club, told The Coventry Telegraph that while the move wasn't certain, the pair have had discussions about forming a joint property company which would form into an events firm designed to handle the day-to-day running of the stadium.

To finance the redevelopment, Sharp said the building of student accommodation for the local university and potential retail facilities were plans that were being explored.

Money would also be put forward by the rugby club, football club and selected partners. Finding a naming rights partner for the ground is also a possibility.

"I would like to see a community, a gym and maybe some retail to make the site work," said Sharp. "We would be looking at 15,000 seats or above looking at the football club gates and what they would get if they went up the league. But I don't want the rugby club to be rattling around in too large a stadium."

Coventry City FC moved into the Ricoh in 2005 when the club was still in the Championship, briefly moving out of the 32,000-seat structure between 2014 and 2016 following a dispute with operator Arena Coventry Limited (ACL).

Wasps Rugby Club purchased the stadium in November 2014, and although the football team keeps 100 per cent of gate receipts and 50 per cent of food and drink sales, it loses out on non-matchday income and sponsorship revenue. It also has to pay Wasps rent, and recently signed a two-year extension to the lease.