0 Cowdray Park Polo Club - At the top of its game

Overlooked by the ruins of Cowdray Castle, the Lawns polo ground hosts the annual Veuve Clicquot Gold Cup for the British Open. Overall, the site covers 160 acres and is maintained by Julian Russell-Hayes and his team. Jane Carley headed to West Sussex to find out more about this premier equestrian venue

Ongoing investment and dedication to providing the best possible playing surfaces for horses and riders has secured Cowdray Park Polo Club's position as one of the leading venues for this exciting sport. But, for head groundsman Julian Russell-Hayes and his team, the goal is continued improvement.

With two grounds at separate sites, totalling 160 acres and providing eleven pitches, the scale of the job is substantial. It is managed on an 'agricultural' scale using high capacity equipment, but with close attention to detail. The Lawns ground, which has the atmospheric Cowdray Castle ruins as its backdrop, is home to the final of the Veuve Clicquot Gold Cup - for the British Open Polo Championship, a month-long high goal tournament which attracts some 25,000 spectators -14,000 to the final itself - and is the highlight of the competitive and social season.

Over at the Ambersham ground, across the river from the West Sussex market town of Midhurst, six pitches play host to all types of polo activity from 18-22 goal polo to stick-and-ball practice sessions and chukkas. The largest and flattest pitches are reserved for high goal competition.

Brooksfield, a pitch separated from the main Ambersham ground by a disused railway embankment - which makes a handy vantage point for spectators - has been improved with drainage works over the past two years, at a cost of more than £70,000. 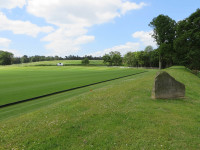 "When Brooksfield was laser levelled in 1991, we did not have the budget for drainage," explains Julian. "The sandy soils drain well and, on the main Ambersham pitches, we did not see any standing water even in the wet conditions of last winter. Whilst the pitches must not be too hard, good drainage is important to avoid 'punching' of the turf by horses' hooves in wet conditions, as we can't control the weather!"

Brooksfield had been leased to a patron for ten years, but when it came back in hand in 2012, the club felt the time was right to drain it. New carrier drains and laterals were installed first, by local contractor ACS, which also takes care of spraying and sand spreading for the club. In 2013, gravel bands were added at 6m centres on the diagonal.

To ensure perfect conditions with the right amount of 'cut' in the turf, regardless of sunshine or the lively breezes that whip across the Sussex landscape, significant investment has also been made in irrigation equipment. 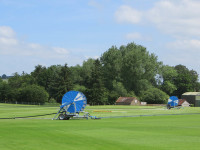 "We made the decision to switch to boom irrigators in 2011 and now have two Briggs booms and reels at the Lawns ground and two at Ambersham, with a raingun retained for use on the Brooksfield pitch. Booms use twenty percent less water than rainguns, and their accuracy is not affected by the wind in the same way," says Julian.

It can take ten hours to apply 20mm of water across the grounds and two hours to set up so, in dry conditions, Julian and his team get the reels going by 9.00am and will also water through the night.

Water is abstracted from the River Rother, under an Environment Agency licence, to a ring main and fed to the system via electric and diesel pumps; installing a reservoir to share with the estate was considered, but the sheer volume needed makes it cost-prohibitive.

Mowing follows an exacting regime with each pitch cut every thirty-six hours in the peak season, stretching to forty-eight hours later in the year and then to once a week in the winter. Kesmac reel mowers, with a 6.1m cut, were chosen for their ability to fold for transport down the narrow lanes and are used from April to September; Major and Wessex roller mowers are also in the fleet, their main role in the season being to cut surrounds and to help flatten and smooth divots. 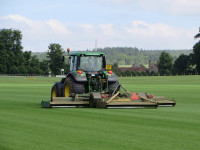 Cut height is 25mm in the season and 40mm in the winter, and Julian comments: "Some clubs use 18-20mm cut heights, but I believe that longer grass encourages rooting and reduces stress. It's not necessary to cut so tight if you scarify, brush and groom the pitches."

Scarification is carried out every three to four weeks using Amazone 210 scarifier/sweepers and the club also has the use of a 9mm spring tine harrow to pull out debris, which is then collected by the Amazones.

Sand spreading on the pitches is a technique first popularised by cricket guru and polo enthusiast Kerry Packer, and Cowdray Park applies 250 tonnes/acre in late March/early April and the same before the Veuve Clicquot Gold Cup. It is spread across the entire pitch area, as July is peak season for all levels, not just the elite sport. Julian explains: "Sand adds cushioning for the horses' hooves and increases grip and traction, reducing the risk of slipping on the lush turf. It is extremely well-received by the players."

Julian, who has been at Cowdray Park for nine years after running his own business as a sportsground contractor, has two full time groundsmen plus a seasonal tractor driver. But a team of up to thirty casual workers supplied by contractors JFD at Midhurst play a vital role. 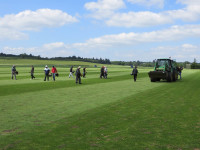 "Teams of six to eight men tread divots after the match and, the following day, any remaining holes are filled with sand and compost mixed with grass seed. They do a great job and it is very well organised - the same people, who are mainly Eastern European, come back every year."

Divot mix is transported around the pitch on a modified trailer pulled behind a tractor on turf tyres, Julian explains: "I was concerned about scuffing by the trailer tyres, so we fitted an additional half axle with two more wheels in between to spread the weight of the trailer across a wider area."

End of season renovations begin with intensive scarification, followed by overseeding with 650kg/acre of ryegrass. Pitches are also vertidrained three times over the winter.

"We use only perennial ryegrass as it is the most robust species and easiest to maintain. The mixture contains four different cultivars which are regularly updated to reflect the latest breeding technology and we put on some 800 bags per season. It's a big investment, although we do get the seed at a good price because of the volume!" 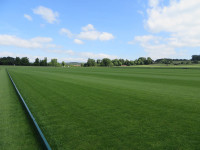 Soil analysis over the winter is used to assess fertiliser needs, but generally agricultural products are used - 20:10:10 summer and autumn and 10:26:26 autumn-winter and early spring. "We need consistent growth rather than flushes - I would love to use slow release fertilisers, but they would be too costly on this scale," comments Julian.

His cut height policy promotes healthy growth so disease is not an issue, but contractors ACS spray for broadleaved weeds and apply chlorpyriphos to control leatherjackets.

Julian also makes use of fairway wetting agents in spring and summer to avoid dry patch, plus some growth regulator to control annual meadow grass.

Other than the sand spreading, the routine changes little in the run-up to a major tournament, although the vagaries of the British weather have to be taken into account. Spectators cars are parked adjacent to the pitches to accommodate that important polo tradition - the lavish picnic - and with hard roads only running around the perimeter of the grounds, heavy rain sees artificial trackway deployed to protect the turf. 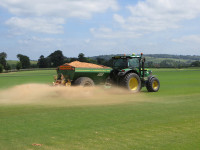 Reflecting on the contrasts in his current role with life as a sportsground contractor, Julian says: "It's not too different, just on a bigger scale!"

Although nestled at the heart of picturesque 16,500 acre sporting estate, which is also home to an 18-hole golf course and historic ruins,

Cowdray Park Polo Club is run as an independent enterprise. Julian reports to the operations manager who is also the financial controller, and any major investments are referred to an operating committee. But, he explains, he has the autonomy to choose equipment and techniques to meet the demanding task of preparing such a large area of turf for top class sport.

"We recently swapped our tractor brand to John Deere," he explains. "A new branch of dealers Farol opened in Midhurst and we were offered an extremely competitive deal. We have five 100hp tractors and the service back-up offered is outstanding. Farol also lend us an extra tractor and several Gators for the Veuve Clicquot Gold Cup final, which is appreciated." 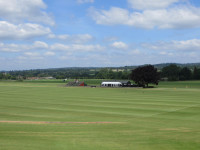 Future projects may include laser levelling another pitch at Ambersham to bring it up to high goal standards, but Julian explains that it may have to be done in phases as it can cost £250,000 to £300,000 to laser level a polo pitch.

Forward planning, even on the most mundane level, involves budgeting for some serious investment. A rolling replacement programme for tractors, which put in some 1300-1400 hours a year - a workload that many farmers would be proud of - every 5000 hours sees a new machine join the fleet every year.