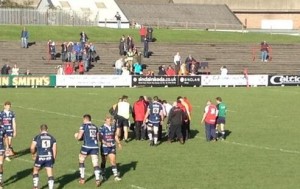 Bristol's match against Aberavon in the British & Irish Cup was brought to a premature end after a hole appeared in the middle of the Talbot Athletic field.

A Bristol Rugby spokesman told ESPN that in about the 55th minute of the match, a lock from Aberavon got his foot caught in what turned out to be a deep hole in the field. The match then continued for another 15 minutes but in the 70th minute of the game, officials inspected the hole closer and alerted the groundstaff.

The hole was at least six foot deep and was, according to the Bristol Post, potentially caused by a collapsed drain. The game was then halted as officials, groundsmen and team officials inspected the pitch. Attempts were made to fill the hole with sand, but the referee called time on the match with just under 10 minutes left on the clock.

Organisers of the competition will now decide whether the result stands as when the game was halted, Bristol were leading Aberavon 24-20.

See the rest of the article on the following site :-http://www.espn.co.uk/england/rugby/story/203087.html