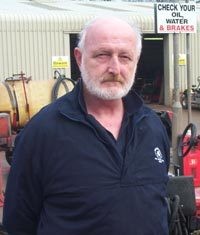 Looking around inside the building one day (as is my habit on occasion) I got to thinking "what would somebody else think if they walked in here and saw what I can see now"? I immediately took pen to paper and began a brief inspection firmly believing that I would find nothing of any real concern. How wrong I was; an open one gallon plastic jug half full of petrol stood next to a nearly full jerry can which had the top open, both were waiting to get knocked over by a passing green keeper or machine. 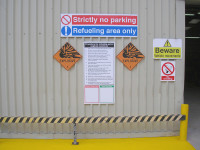 I looked at the petrol storage cabinet, which also had the top open; inside there were several jerry cans one of which had the top open. Not good I thought to myself and decided that something must be done to prevent this from happening in the future.
Our rules state that refueling machines inside the building is not allowed, it still happens though and everyone needed a reminder. I had a word with the boss and he agreed and left it to me (as he often does).

Checking the yard out revealed that the ideal place for a dedicated refueling area did not exist so it was going to have to be second best; it would have to be near the main entrance to the building (unfortunately) so that the kit I had in mind could be kept inside, in the dry where they could not be stolen or vandalized when the compound is closed. A fire and first aid station needed to be close by as well, for obvious reasons. I marked an area 12 feet by 12 feet and it was painted with bright yellow concrete paint surrounded with black painted "hatching", just to help it stand out more and finish the job of neatly.

Next I ordered a sign as big as the wall area available would allow, no excuses accepted for not being able to see it, in this case it is 2 foot by 4 foot. (See the picture above right). Some other signs were hung alongside and all looks good. 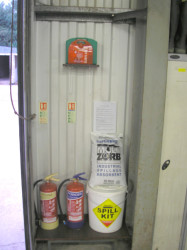 Next I added two extinguishers with their labels on the wall (just inside the door in a recess where they couldn't be damaged) informing the reader what is in them, a first aid kit was put on a shelf together with a burns kit, these items were added to the list for a monthly check. Better have something to soak up spills I thought and bought a couple of bags of spill dry granules, with these I placed a dozen soak up pads designed for fuel spills and just for good measure a specialist spill kit was added.

No excuses now and credit where it's due, the guys use this when re-fueling (almost) without fail and (mostly) others do not park there, so all is well. It's an imperfect world, as well we know.
Be interesting to see what others do for refueling, if anyone can improve on this or has a better/safer way of refueling petrol engined machines please let us know.