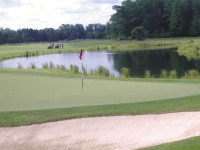 It is usually players who suffer the "yips", that nervous condition that blights their putts and ruins their game. But now it is greenkeepers who are suffering tremors as they are squeezed by the credit crunch, appalling weather and the fury of golfers whose games are ruined by waterlogged courses.

A telephone stress-line is being opened for the 6,000 members of the British & International Golf Greenkeepers' Association (BIGGA) to help to cope with the rising numbers buckling under the pressure at a time when the golf industry is falling victim to the climate - both financial and the dreadful weather.

While the top of the game is awash with massive prize-money for players such as Tiger Woods, the highest-earning sportsman in the world, the grass roots of golf have been swamped. Two rainy summers have led to a dramatic fall in attendances at courses, with corporate clients taking their money elsewhere and casual golfers preferring to stay at home rather than attempt to splodge around a puddle-strewn course.

The rotten weather and economic downturn have combined to mean the closure of clubs and a huge drop in demand for turf and the services of groundsmen. Where courses have stayed open, greenkeepers have often suffered the abuse of players.


"Trying to get the message across to golfers is very hard," Duncan Peddie, the greenkeeper at Alloa Golf Club in Scotland, said. "The ones who don't listen can make life very difficult."

Scott MacCallum, BIGGA's communications manager, said: "Two bad summers coupled with the people with money to spend on social golf keeping their cash in their pockets is not helping. There is an oversupply of courses, which is leading to some being unable to survive.

"For our members, that means losing their jobs, while they are having to deal with members who do not understand how difficult the weather conditions have been. They have a bad round and blame the greenkeeper."

Duncan Forbes, an executive at Stewartsturf, which grows turf for leading clubs, said that their turf farm in East Lothian had 20 per cent of their usual annual rainfall on one day. "Heavy rainfall is washing newly-applied fertilisers out of the soil," he said. BLEC, a leading turf equipment company based in Peterborough, is going into administration this month, blaming a drop in orders.

Increasing fertiliser costs, the rising price of diesel, which is used for cutting machinery, the weather and the financial downturn have turned into a plague of problems that could mean golf finds itself in the rough next year.