What can you do when everything has been tried to get air into a cricket square, and either it will not go in or the surface disruption is likely to be too great?

First off, let's go back a few steps and explain why the problem exists and identify what exactly the problem is. On our cricket squares we have a pan at around 4 inches deep which has been caused by years of very extensive rolling and poor aeration techniques being used. How much rolling and how much aeration to undertake is really down to the individual. I work along the lines of only rolling to the amount I can aerate.

I am very lucky to have quite large range of equipment but, even then, I cannot always get out of a trouble. In my situation I can roll as much as I need without any concerns because I have the equipment to aerate and, most importantly, I can aerate at various depths.

The major cause of the pan on the squares has been continuous aeration at the same depth year in and year out.

So, if I have all the equipment why I am still in trouble? Well, the pan on our squares is so bad that any attempt to breach it results in the top lifting due to no rooting. Mind you, it would make lifting the top off my squares a very quick process. 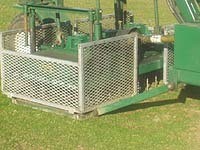 After several days of watering and testing the surface, the time arrived in mid October when we were to go ahead and drill away at our squares. Other issues running through my head were how the hell I am going get some quick growth from the new seed so that it is strong enough to get my aeration equipment on the square? Also, with this type of work, the drilling process can cause a lot of mess. However, as we had not put on the top dressing nor overseeded the mess was very minimal. 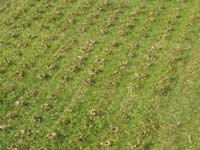 Alongside is a picture of how the square looked after the work was complete.

Once the squares had been drilled it was time for me and my staff to get some work done. Actually, we did not even let them complete a square before our seeding machine was on doing its bit. All of this work was carried out towards the end of October which is not the best time to seed let alone get good root growth. 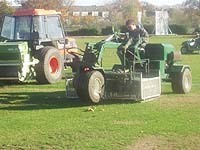 As some readers may know I have worked with sugars for many a long a year, and I have suffered all the ridicule - is it straight Tate and Lyle? Do you have dilute it down? And so on. In fact, I was told by a very large organisation many years ago when I first started this project that I was completely mad and totally wrong. Stubborn old me did not listen. It is quite funny when I look and see that the company is now working on the same type of research.

After the seeding we applied a top dressing, not a heavy one though. I will review that situation in the early spring. We then applied a mixture feed to the square which consisted of a half rate of seaweed, Mg at 5% and sugars.

It is now six weeks since the work was carried out and a good friend and a very astute man, Tony Leach, visited our site. He was very surprised not just at the fact that we had a strong coverage on the squares but the fact that, on one of the squares, it was possible to hold the top of the soil sample, give it a shake and it held together.

We now have around six inches of root which, I am pleased to say, is through the pan. Normal aeration can begin in the near future. The soil samples are showing good results. Growth is very strong even though we have suffered from several frosts. This growth is very limited at the blade of the plant but, hey, the roots are doing great!

Do sugars work? I am no scientist so I will let you decide for yourselves. Oh, and by the way, no granular fertiliser has been applied since August, we do not have automatic irrigation and we did not use germination sheets 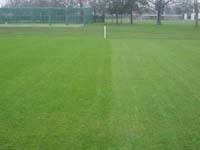 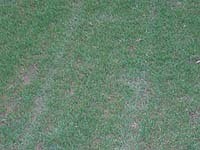 The little lines are from a Fungicide going down because no one is immune from worms etc. It's not all plain sailing, some of the ends still need quite a lot of work before next season starts.

I hope, at least, this provides a slightly better view of the use of deep drilling and sugars. I wish all of you a Merry Christmas and a Happy new year.