2 Cricket club in Shropshire caught out by lightning bolt 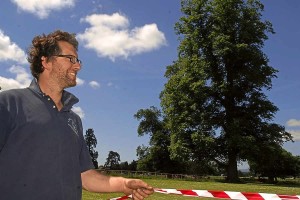 A lightning strike on a 150-year-old tree has hit a thriving cricket club for six, forcing it to cancel games at its ground.

The protected lime tree was stuck by a bolt of lightning at Worfield Cricket Club, near Bridgnorth, during a thunderstorm over the weekend, leaving it badly damaged with two splits in its trunk.

Experts from Shropshire Council came out to assess the damage because the landmark tree has a preservation order on it.

A 30-metre boundary has since been placed around the tree, which sits near the boundary at the club.

The exclusion zone has meant that no games or training sessions have taken place since the lighting strike on Saturday.

There are fears that the tree could eventually be cut down after the lighting nearly split the 125ft landmark in half.

Cricket club chairman Iain Seedhouse said: "The tree was struck by lightning Saturday morning and basically split it down both sides.

"We've been told that it has got to come down but it's currently in a conservation area, " he added.

"There are also health and safety issues to worry about.

"The tree stands in the far right corner of the ground, with Davenport House behind it, so it forms quite a backdrop.

"We believe it's about 150 years old and it's one of the biggest in the whole park," said Mr Seedhouse.

Because the tree sits inside the club's boundary rope the rules are that if the ball is travelling for six runs, but hits the tree in mid-air, four runs is still called.

Mr Seedhouse said that because a third of the pitch had been sealed off, while the council worked out what action to take over the tree, all training and matches, for both the junior and senior sections, had either been cancelled or had been rearranged by the club.

He added: "We're still going through all the paperwork now because it's obviously in our best interests to get this sorted out quickly.