0 Cricket Covers from JMS in Demand in India 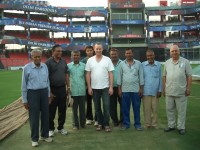 England is the country the rest of the world used to associate with cricket, cucumber sandwiches and "rain stopped play" but in recent years the epicentre of world cricket has moved to India with the introduction of the billion dollar T20 Indian Premier League. However it is still the hard earned knowledge and technical expertise of JMS Sport, a company in Keighley, that the Indian cricket authorities have called upon to combat the disruptive effects of rain on cricket matches in the sub continent and for advice on suitable grasses necessary to prosper in the harsh conditions!

The emergence of the T20 Indian Premier League has changed cricket for ever and it is vital that with so much revenue generated from global TV coverage that any disruption caused by rain is kept to a minimum. This is where the expertise and ingenuity of the JMS Mobile Covers and Pitch Protector systems come into play. Lack of grass on both the squares themselves and the outfields have also been a cause for concern.

Managing Director of JMS Cricket, Jonathan Smith, has just returned from India to supervise the installation of the comprehensive covering system that the company has refined with their ten years of experience in the business.

"We have been in touch with representatives of the BCCI for some considerable time but matters were brought to a head when the wicket in the capital, New Delhi, was reported as unfit. This is the equivalent of having an iconic venue in London like Lords or The Oval prevented from staging important matches" says Smith. 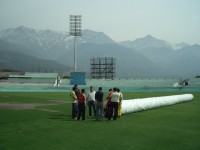 A number of interrelated problems were identified. The reconstructed square suffered because of poor levels which, in itself, would lead to inconsistent bounce and the wickets were also two paced. These problems were exacerbated by the inability to control moisture content and provide a decent level of grass coverage.

"Although not a "quick fix" our raised Mobile Covers help control moisture content in the wicket and with so much at stake for all concerned the Delhi District Cricket Association asked me to travel to India to ensure that the ground staff were trained to enable them deploy the system to maximum effect. They also sought advice on a number of other matters related to preparation and maintenance of cricket squares and outfields as JMS has had experience at the WACA in Perth", continues Smith.

One of the most spectacular, but challenging venues designated to stage T20 Indian Premier League matches is the stadium in Himachal Padesh, way in the north of the sub continent. 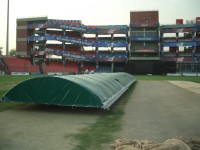 The cricket ground, at 4,700 feet above sea level, is the highest in the world and has a breathtaking mountain backdrop. They have virtually rebuilt the stadium, installing floodlights, increasing crowd capacity and improving the facilities for the players for the T20 Indian Premier League matches to be staged on April 16 & 18 and they required our patented Pitch Protector system in place to combat the effects of any rain", explains Smith.

With cricket so central to life in India it will come as no surprise that the creation of the ground at Himachal Padesh, capable of staging these important matches, will be the subject of a documentary scheduled for Indian television.

Like most successful commercial relationships, the benefits are mutual. Bat making and the production of player equipment is now centred in India and JMS sources its own high calibre, competitively priced range of cricket kit - bats, pads, gloves, balls etc - from the sub continent.

"Willow from England is sent out to India and the JMS bats are hand crafted in the traditional manner for us in Jalandhar, in the Punjab - just like so many of the other global brands," concludes Smith.