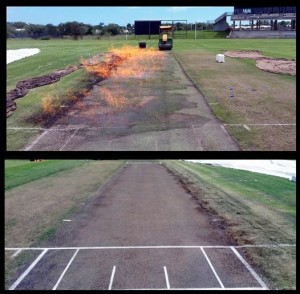 And the burning question is? Did the bizarre method used in a desperate bid to dry the surface out work?

Well, let's say the man who set it ablaze, Tracy Village Cricket Club president Jack Flynn, who also doubles as the groundsman, proved to be a big hit with the players.

Just six hours after it looked as though no play would be possible, the Darwin and District Cricket T20 competition went ahead as planned thanks to Jack.

Not that Jack thought he would have to use such an unusual method to ensure it did.

But was left with no other choice after he turned up at the ground to see the covers he had put over the pitch the night before not there anymore.

He said: "I first thought they had blown off and I was about to be responsible for the season opener being cancelled. I later found out the covers had been removed by someone. It was wet from storms and I only had six hours to get it up."

But why did he decide to set it alight?

He explained his reasoning: "I've seen people chuck coals on the pitch to dry it out and in the Caribbean they use kerosene on it. I didn't want to use something that was oil-based, so I thought metho - methylated spirits - would do the trick."

"It's just alcohol and I figured it should burn up and not leave any residue. I used 20 litres first and it didn't do much, so I poured another 40 litres on and it dried it right out."

Jack's quick-thinking ensured the sabotage attempt was in vain, the games went ahead and there was no lasting damage to his pride and joy.

I cannot imagine Jack's method ever being seen at Lord's!

For the original article, visit www.thesun.co.uk.