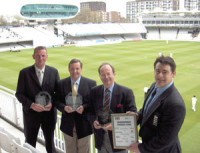 Three groundsmen were honoured this week at the home of English cricket as they each received a Cricket World & Pitchcare Cricket Groundsman of the Year Award for 2004.

The awards, now in their second year, recognise the hard work and high standards achieved by cricket groundsmen in the recreational game and are split into three categories - educational establishment, private club and local authority.

Treble the nominations were received for this year's awards compared to last year through the Cricket World magazine, and the www.cricketworld.com and Pitchcare websites. Judging of the shortlisted entries took place during March at locations as far apart as Newcastle and Jersey and was carried out by Pitchcare's Dave Saltman and Laurence Gale.

The presentations were made to Keith Exton, Chris Westbrook and Ian le Marquand by ECB Pitches Consultant Chris Wood in the presence of sponsors and invited guests. The winners then enjoyed lunch at the Lord's Tavern before taking their Executive Box seats in the grandstand to enjoy the afternoon's play between Middlesex and Nottinghamshire.

Alastair Symondson, Editor of Cricket World magazine, the Pitchcare judges and Chris Wood all expressed their admiration for the winning groundsmen and thanked the sponsors whose continuing support makes the awards possible.

Entries are now being invited for the 2005 awards. For further information or to make your nomination visit www.cricketworld.com or www.pitchcare.com.