The awards, now in their fifth year, recognise the hard work and high standards achieved by cricket groundsmen in the recreational game and are split into four categories - ICC Europe, educational establishment, private club and local authority.

Treble the nominations were received for this year's awards compared to last year through Cricket World® magazine and Pitchcare.

As always, this year's Cricket Groundsman of the Year judging was a very rewarding experience, giving us the opportunity to meet many dedicated Groundsmen at their home venues and seeing a wide range of skills, knowledge and experience being put into practice.

As usual the standards were very high; obviously there were issues - how do you compare a ground that has everything, with plenty of resources machinery and staff, for example, to one that is maintained by volunteers with little or no equipment?

In our opinion, it is all about the Groundsman himself; what he brings to the table in terms of commitment, enthusiasm and guile, together with the ability to get things done with the resources he has at hand. And, above all, with the skill to produce a playing surface that is both safe and consistent while, at the same time, promoting the game of cricket.

The presentations were made to the winners by Head ECB Pitch Advisor, Chris Wood, and Director of ICC Europe, Richard Holdsworth, in the presence of sponsors and invited guests.

In the morning, the winners took to their Executive Box seats to watch the Cockspur Cup Club Cricket Final between Malden Wanderers and Kibworth and enjoyed lunch at the Lord's Tavern. Unfortunately, the weather closed in during the afternoon and the match will be replayed. However, the winners and guests were taken on a behind the scenes tour of the ground facilities by Chris Wood, which was an experience of a lifetime.

Alastair Symondson, Head of Media at Cricket World®, the Pitchcare judge Laurence Gale MSc MBPR, Chris Wood and Richard Holdsworth all expressed their admiration for the winning groundsmen and thanked the sponsors whose continuing support makes the awards possible.

Entries are now being invited for the 2009 awards.

For further information or to make your nomination visit www.cricketworld.com or www.pitchcare.com.

Groundsman of the Year Winners 2008 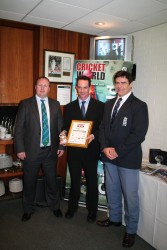 Phillip led the groundstaff in hosting the India/South Africa triangular series in early August against Ireland at the Stormont ground, Belfast 2007. The one outstanding achievement in relation to the hosting of the series was the preparation of five ODI pitches at the one venue within nine days.

His achievement was even more remarkable considering the weather conditions prior to the triangular series which would have deterred many a groundsman from attempting to stage such an event.

As head groundsman at Stormont the Northern International venue for the past number of seasons Phillip has overseen massive ground developments preparing pitches and the venue for ODIS against England, West Indies and others with success.

Graeme has, against considerable climatic odds, produced an outstanding ground at Gordonstoun. 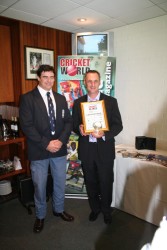 Les has been groundsman at Lytham Cricket & Sports Club for 12 years. He is responsible for the upkeep of nine acres of sportsfield and surrounding woodland. Sports played are Cricket, Tennis & Soccer. Cricket is played at ECB Premier League level.

The club has also been a county outground for Lancashire CCC. This past 18 months, a major step forward in terms of achievement has been reached. New standards have been set & met. Also, a 3 year environmental project has been undertaken to improve biodiversity for wild life. Help has been received from the BTCV. The ground has never looked better & all playing surfaces are excellent. Les has achieved this whilst working to a strict and limited budget. 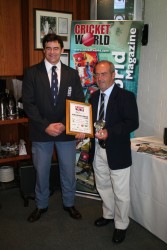 Past Runner up, Ian looks after the Grainville Playing Fields which this year hosted a number of ICC tournaments. Ian has been employed at the ground for the past 33 years and continues to raise the standard of work implemented at the ground.

Pitchcare and Cricket World would like to take the opportunity to thank all the sponsors for their support for this competition along with the sports governing bodies, the ECB and ICC.