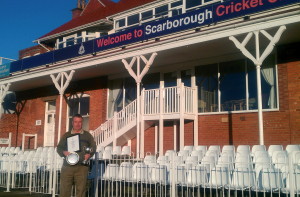 Recipient of the England and Wales Cricket Board's (ECB) County Outground Award and the Solly Sports Yorkshire ECB County Premier League Groundsman of the Year Award for 2012, John says that the club's outfield remained in excellent condition right through the season, thanks to a timely application of Sierrablen in April.

John explained that he had used Sierrablen controlled-release granular fertilizer for the first time in 2006 when he was responsible for South Northumberland Cricket Club's ground. "I'd attended a seminar on the former Scotts' product range and spoke afterwards with the company's technical area sales manager, Simon Hardcastle, outlining what I wanted to achieve on our outfield."

John's goals were sustained turf vigour, colour and health from one spring application and Simon recommended Sierrablen as being the ideal fertilizer for his needs.

Having achieved all of his initial targets in improving and maintaining turf condition, John was subsequently named Cricket World's Community Club Groundsman of the Year for 2010. This success paved the way for his move to Scarborough Cricket Club, a Yorkshire county match host ground whose seating capacity, at 11,500, is the largest in the country outside Test Match venues.

"The ground was not in best condition when I joined the club in early 2011 and I spent my first season getting the square and wickets up to a consistently high standard," John recalls. "At the end of the season, I decided to give the outfield closer attention and, based on my earlier experiences, persuaded the committee to let me use Everris Sierrablen, applying the granules at a rate of 35m/sq m in mid April 2012 using a tractor-mounted spreader."

Preparations ahead of the Sierrablen treatment started in autumn 2011 with two-way scarification of the outfield followed by an even application of fine sand, moss treatment and deep-tine aeration, together with regular sorrel rolling over-winter.

"Keeping the surface open and free-draining maximises the benefit to the turf of subsequent fertilizer applications," commented John. "The controlled-release technology in Sierrablen ensures that nutrients are released at the optimum rate for the specific growth stage while discouraging leaching. The results were clear to see as we achieved the required effect throughout the season with no growth flushes."

Comparing the outfield of 2012 with that of 2011, John said that the turf last year had been twice as good, maintaining excellent colour, growth and health during what had been a difficult season, weather-wise.

"It is important that the surface be kept open but there is no doubt in my mind that Sierrablen has helped transform the ground," he said. "Not only did it bring favourable comments from members, visitors and umpires, but it helped secure two important awards that reflect well on my work and the ambitions of the club. I will definitely be using Sierrablen again this year."