Cricketers across the dale rely on unsung volunteers to keep their pitches in tip top order. Reporter Alex Metcalfe went up to see Dave Garth about his methods on the hallowed turf of Middleton-in-Teesdale. It's forty years since Middleton-in-Teesdale Cricket Club was reformed, and groundsman Dave Garth has been there for most of them. The 65-year-old has tended to the Town End ground since 1985 through icy winters, sodden summers and foot and mouth disease.

In a recent article with Teesdale Mercury, it was very wet underfoot and, Dave was reluctant to lay feet on his square.

Given the winter weather, there is good grass growth, mainly down to the end of season work in September, which lays a foundation for the following year. But, when Mr Garth first set to work on the school field, things were a bit different.

"When I first started it was a very new situation. We had only done the ground for seven years and there was no end of season work," he says. "We decided that, if we wanted to play cricket, we wanted a fairly even bounce and even carry; it was a bit up and down then."

The saying goes; 'for every year a pitch isn't treated at a season's end, it is put back five. But, by 2001, a decade-and-a half of graft meant Middleton's square was in a good place.

Dave said: "We got it somewhere near perfect and then foot and mouth killed us and we were kept off it for a year by DEFRA. The square had a foot-and-a-half of grass on it. This meant we had to start again, so all that work went down the pan. But, in a crisis like that you just can't argue the point."

Since then, it's been a case of rebuilding and, despite its colder climate, the club now boasts one of the more consistent decks in the Darlington and District League. 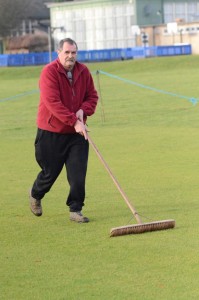 Scarifiers, spikers, fertiliser, top dressing, mowers and rollers are all part of the groundsman's arsenal Dave and award-winning groundsman Ian Dent, at Raby Castle CC, work on a number of grounds around the league.

He adds: "This year was hard labour but, without it you don't get all this at the end. We've done about nine this season. We don't use inferior products because you get inferior results. However, seed, loam and fertiliser don't come cheap and one false move can cost hundreds of pounds in the long run."

Each ground has its own idiosyncrasies and Dave has decades of trial and error to fall back on.

Winter sees the ground's square spiked once a month; but, no later than the end of January otherwise it starts to crack in the summer time. Spring time heralds the pre-season work with twenty hours of rolling, at a rate of two hours per day, pencilled in between the showers.

As the season nears, the square is cut down to 10mm and rolled with the first track of the year lined up a fortnight before stumps are pitched.

"We are cruel to grass - it's the best weed there is," he adds. "We expect it to grow but we hammer it for twenty-five weeks a year."

The 22-yard strip sees its grass cut and brushed down to between 4mm and 6mm with rolling every day up to a Saturday. Sunday is no day of rest as repair work gets going and the whole cycle begins again.

"The thing is that your work is never finished," he adds. "You will always look at something and think 'something's not right there'. If I don't know the answer I'll phone Ian or ask as many people as I can - if it doesn't work, it does not work."

Bugbears come in many shapes for a cricket curator - be they rabbits, worms, fungal diseases or the elements themselves not reading the script. But, the scourge of all groundsmen is the ignorant human who would think nothing of wandering across a repaired pitch-end to undo a day's work or more.

Luckily, Middleton-in-Teesdale is blessed with a knowledgable bunch who muck in to lend a hand when they can.

He says: "We manage to keep most people off it but we still get a few. The youngsters are no problem - they come down on a Tuesday night and see what's done. I tell them to look after it because it's theirs."

Dave hails from near Ravensworth, in West Cumbria, and came across the Pennines in 1980. He retired in August last year after forty-nine years in the parts operation side of the motor trade. But he's not handing back the mower keys in Middleton just yet.

He adds: "I hope people will take over as I can't do it forever. It was good when I was working as it enabled me to get me out of the house for an hour or two."

"I would recommend it to anyone who wants to take it up... once you get it, you have the bug. Folk walking down on Sundays must think I'm out of my tree, but it's the best feeling in the world on a Friday evening to sit down with a glass of water and think that's a good one."