by Neville Johnson
in Cricket, Public Places, and People
on 15 Jul 2016

County outgrounds are at the heart of English cricket. True cricket followers love them, but they are an endangered species as commercial forces govern the counties' thinking. Neville Johnson went to Arundel, surely the loveliest of them all, to learn about its history and what makes it so special from the man who looks after the playing surface

The Arundel Cricket Ground is set near the West Sussex town's restored and much visited mediaeval castle. Surrounded by trees, with a single large gap giving a far-reaching view across the Weald, it is undeniably a place to visit, cricket or no cricket. The game is, however, what sets it apart.

I'm there to meet Grounds Manager Lee Farquhar and we chat near the pavilion as Sussex Martletts and the Eastbourne College First XI do battle on one of his strips below. It's very early May and the occasional sound of willow on leather, a few gentle claps now and again and the first real sunshine for ages, makes working outdoors about as good as it gets, we both agree. 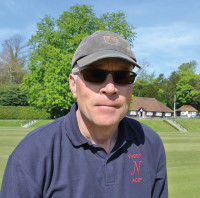 Lee has been involved in cricket pitch maintenance all his life. When he was about fourteen, he helped out at Ruislip Cricket Club whilst playing Colts cricket there as a schoolboy. When he left school, he studied for Greenkeeping and Sportsturf Management qualifications at Brinsbury College and, in 1987, actually came to Arundel during his studies for work experience because family had moved to the area.

A couple of years later, Arundel contacted him again when a job as assistant groundsman came up. He worked there for six years before taking a job at the Bank of England sports ground at Roehampton where he looked after the cricket pitches as well as eighteen grass tennis courts used for the qualifying rounds of Wimbledon. He moved on from there to become head groundsman at the Royal Sun Alliance Star Sports Club in Horsham and, two years later, when Colin Dick the then Grounds Manager at Arundel retired, he was offered the post as his replacement. That was eleven years ago and Lee has been here ever since.

Lee tells me that the ground was constructed in 1895 by Henry Fitzalan-Howard, the Fifteenth Duke of Norfolk, basically for his own use as a private cricket ground. Curved and fairly steep banking around much of the pavilion end gave it a distinctive amphitheatre feel, which makes cricket watching - big or small match - a delight. It is actually built over what was called Arundel Little Park, through which the road to and from London passed. "It coincided with other building projects on the estate apparently," said Lee.

"The mischievous story at the time was that either this was a way of providing work for families affected by the downturn in agriculture or a means of getting cheap labour. It's been a wonderful heritage and the feeling is that it was the former."

The ground still belongs to the Dukedom and it is leased to the Friends of Arundel Castle Cricket Club. Lee is employed by the club.

"The Friends Club was formed in 1976, a year after the then Duke of Norfolk, Bernard Fitzalan-Howard died, by his widow Lavinia, the Duchess," said Lee.

"Her husband's second cousin Miles, who took over the Dukedom, was not a cricket lover and she very much wanted to see that the game would continue being played at Arundel. The formation of the club meant that the Norfolk cricket heritage would last. It was a fitting tribute to her cricket-loving husband."

"There is a more direct Norfolk interest in cricket these days. Edward, who became Duke in 2002, is President of the Friends Club and he does come to matches from time to time."

Before 1975, the Duke of Norfolk XI had played many a game on the ground, notably against visiting international touring teams. Often as not, it was the curtain raiser to a season and the first match on the itinerary of overseas test sides. The ground's record attendance of 15,000 watched the Austalians play a Duchess of Norfolk's XI in 1989 as a prelude to an Ashes series.

In 1990, Sussex played their first County Championship match at Arundel. This was during the time Lee was first here as an assistant. Since then, he's altogether been involved in seventeen Sussex Championship matches plus the T20 games that are now tagged on to the fixture.

There are sixteen pitches on the square at Arundel. They're not all 10 feet wide: some are just 8 feet 8 inches, which is just the width of the creases. The larger ones are in the centre to cater for the bigger matches. Beneath the whole ground is an 8-inch layer of chalk over a clay sub-structure. Six inches of topsoil overlay this.

"It's fairly free draining and we don't have major problems with surface water," said Lee. "The exception to this is that the square itself is a slight 'saucer' which means, in very wet conditions, water can be held in the middle and this can be a nuisance. To keep the playing areas dry, I use Total Play and Stuart Canvas sheets and, for big matches, I cover the whole square with a single sheet from Nigel Fenton."

"Otherwise, there are no major hazards to upkeep, other than now and again having to keep pheasants from the estate from eating grass seed. Germination sheets usually do the trick. Rabbits are more of a nuisance to us."

Over the years, Lee and his predecessors were left to produce pitches for county games held here but, since the last Memorandum of Understanding from Sussex CCC, he's had to follow their specification. In short, he has to do it the way they want. I sense this grates a little.
The county club had one of the strips at Arundel relaid in September two years ago specifically for 4-day championship games, and Lee and the Friends Club are grateful for that. It was getting old and tired and there was a need to improve pace and bounce.

"They did a good job, it has to be said, but we began preparing it in April for this year's match against Northants in June and it was moving under the roller," said Lee. "I'm not in any rush to use it. It isn't quite ready and I want it to bed in properly. I expect it to be fine for 2017 county use." 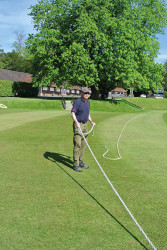 Lee says it's good that Arundel and the Friends Club get the recognition as a provider of county cricket. Close on 4,000 attend the championship matches here each day, which must make it one of the best attended outgrounds in the country. Last year's T20 against Surrey was an 8,500 ticket sell-out. For Sussex members coming to Arundel, it must be one of the highspots of the season. It certainly brings a commercial benefit to the small and historic West Sussex town. The hotels and pubs love it.

The prestige it brings is much appreciated by all concerned. Despite all the normal anxieties that groundsmen get before and during big matches, Lee wouldn't want to lose it. "It's an enjoyable week and I know people really love coming here, which makes us all feel good about what we do," he said.

For the Festival Week, Lee calls in four volunteer helpers because of the extra jobs like covering the whole square and looking after the practice nets. They are 'regulars'. Lee knows them well and they know what they are doing.

Lee firmly believes outground cricket is good for the county game and cricket in general. "They should be part of the county scene," he said. "It gives cricket followers the opportunity to enjoy different surroundings, and have a different experience. For our business, it gives more groundsmen the chance to prepare pitches for a higher standard of the game. There is an added pressure, of course, on us outground custodians. It's a one-off, your one chance to shine, or get it wrong. You do feel like everybody's looking at you. I can take it, and it is good though."

"Match day duties are that bit less relaxed than for other matches. I fret about mechanical failures and holes in sheets especially. I can't think of any black days though. I'm just a worrier and have sleepless nights about things that never happen."

For Lee, nothing tops the moments when someone comes up to him and thanks him for what he and his assistant Iain Sykes have done. "A lot of people only come here once a year. It's their big day out and it means something to them," he said.

The boys from Eastbourne College won't play here again, in all probability. You can imagine 'I've played at Arundel' having a ring of pride about it.

Lee is a cricketer himself, in the twilight of his career, as he puts it. He captains the estate team ironically called the Grasshoppers. They play regular matches at the ground on pitches he has prepared. "I'm a bowler, but I do like batsmen getting big scores on my pitches," he admitted.

"The other day, a batsman called Jordan Silk, playing for the Duke of Norfolk's XI in a 50-over match against Oxford University, scored 236 here. It was an Arundel record, beating Murray Goodwin's 235 for Sussex against Yorkshire in 2006."

"When it comes to 4-day games, I want more than anything that they go the distance and there's cricket every day with close finishes in the final session. Whatever happened to sporting declarations?"

The club owns all its maintenance kit. Lee has a budget for improvements, but money is perpetually tight and he has to make a good case to the committee to get something new. "They're all good cricket guys and I get a decent hearing every time," he said. "We needed a new tractor a couple of years ago and the club held a fundraising dinner to get the money."

A visit to Arundel cannot pass without mentioning the splendid Arundel Castle Cricket Foundation. This charitable organisation, set up in 1986 and now run by former Sussex skipper John Barclay, works alongside the Friends Club and is specifically aimed at youngsters with disabilities and special needs, particularly from inner city backgrounds. In thirty years, it has brought the joy of cricket to hundreds of them, at the Arundel Ground and at an indoor cricket school, funded by the late Sir Paul Getty and opened by HRH The Prince of Wales in 1991.

Lee draws attention to a group of such youngsters enjoying a supervised day out. "We have a programme that's been running for quite a few years now which gives special needs schools the opportunity to come here and let the kids get a feel of what cricket is all about, on the pitch and behind the scenes," said Lee.

There are about forty of these visits each year involving over 600 children. It says everything about everyone and everything at the Arundel Ground.

It is rare for Lee to call in outside help, but a couple of year's ago he did have the square fraise-mown by Grasstex of Horsham to get rid of a tiny layer of thatch. At the end of each season, he also enlists the services of a man called Peter Wilton and his Graden scarifier to help get renovation underway. Otherwise, Arundel is very much a self-contained gem. Long may it continue.