0 Cricket square maintenance through the season "You don't eat all your breakfasts for the week on Monday morning. If you did, you would feel pretty sick for a couple of days and starving for the rest of the week"

Lawrence Gale Msc. is nothing if not persistent. Late in August 2011, the indefatigable (that's what George Galloway called Saddam Hussain) Loz came down to Guildford to give me moral support on my debut as a Pitchcare Instructor delivering a course on Autumn Renovations of the cricket square. The uncomfortable fact that I no longer carry out Autumn renovation in the traditional prescribed manner, at the traditional prescribed time, proved no barrier, and the feedback from the attendees was very positive and a good time was had by all.

Anyway, since then, Loz has been badgering me on a regular basis to submit an article for the magazine, but a slight lack of confidence and large slice of laziness has thus far held sway. However, his most recent call was insistent, and I felt suddenly guilty for my prevarication. "What shall I write about Loz?" I said. "Oh, anything," he replied, "What about the ten day preparation lead up for a match pitch." Again, the fact that I don't necessarily use the prescribed ten day prep, would appear to be another case of do as I say and not as I do!

As fate would have it, a few days before Lawrence's call, I attended the Surrey Cricket Groundsmans Association annual conference at the Oval, and was asked to share the leadership of a small group workshop session with Chris Wood, the ECB Pitches Consultant, and our subject was the vexed and topical subject of spiking and aeration.

Now, I am a firm believer in the interrelationship of all the operations we employ to produce good playing surfaces, i.e. it is pointless doing one thing unless you do

another. A lot of you cricket groundsman out there would say that's obvious, but it is amazing how often the elephant in the room is mistaken for a rhinoceros - bear with me, I'm going somewhere with this.

Back to the spiking workshop - my main contribution to the session was to try get across to the group that, because of a simple misunderstanding of language, it has been assumed that deep spiking alleviates or decompacts compacted cricket squares. Why would you want to decompact a cricket square, when compaction is the very thing you are looking to achieve? When you have achieved a solid, compacted square, you must then address the 'unwanted' and 'harmful affects' of compaction by getting oxygen light and water to the root system. And, moreover, it needs to be done on a regular basis - in season and out. Keith Exton's adoption of deep spiking in the middle of the season at the SWALEC (Sophia Gardens for me) is a complete volte-face to traditional practice.

The cricket square is an organic entity, much like ourselves, and needs to eat, breathe and dispose of waste material to remain healthy. All this has to be considered and implemented well before any thought of the preparation process and lead up time of pitch making.

We have already dealt with the breathing function with deep spiking. The feeding element is obviously carried out by fertilising, but this too must be done with the 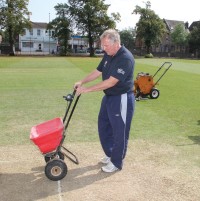 needs of the grass plant in mind. One of my 'mantras' is "you don't eat all your breakfasts for the week on Monday morning," if you did, you would feel pretty sick for a couple of days and starving for the rest of the week. Same with grass and fertiliser.

I am going to be a little controversial here and say don't believe what you read on the application rates on fertiliser bags or containers. If it says 70g/m2, put it on over a three or four week period at reduced rates. By the way, I don't fertilise the whole square as an entity after the start of the season. The last "whole square" fertiliser application (at half rate) is at the beginning of April. Thereafter, only individual pitches in recovery and renovation are 'lightly' fertilised. Overfed cricket squares are like overfed people, unhealthy and sluggish.

Excreting waste material is, again, pretty obvious. Of course, for our purposes the waste material is thatch, left over after the digestive process. Scarification - plus also encouraging a healthy microbial population - careful all you scientific types trying to eradicate nematodes and other 'pests'. Remember, that there are "good guy" nematodes, and magic bullets don't discriminate. Again this is like people - if you eat well, keep fit and don't get fat, there's loads of bugs you won't get.

Scarification is, again, an all year round activity if you don't want you square to get constipated (sorry). Thatch is always forming - even while I am writing this article, so it should be constantly attacked.

The once a year blast at the end of September is not enough - which is a major reason why I am no longer an autumn renovations man, purely because it sends the wrong message. By all means do it, but not in isolation.

You will be amazed how much debris will come out of a pitch just played on if you attack it seriously during the season. Don't forget, it will not have "had the treatment" for almost a year. And you will also be surprised how quickly you can play on it again, if necessary.

By the way, in light of the drought conditions which a lot of us are coping with, some advice and observations. Pitches which "explode" when very dry are almost always "thatchy". This is because thatch, when dry and mixed with last autumn's topdressing, becomes very unstable, and it is this which "bursts" on ball impact. Get that thatch out so your roller can press the grass into the soil.

Use heavy dews and any rainfall - keep four or five pitches mowed out (not too short - I tend not to get involved with HOC and mms but, if you press me, no shorter than 6-8mm), and roll all of them in the early morning for about twenty minutes each - funnily enough, that's about seven passes, which will keep the Cranfield people happy.

Sorry Loz, I was going to do a ten day pitch prep for you - perhaps another time!