Mark Foster has been recognised for clocking up 40 years of working on Hastings' finest cricket grounds. The 56-year-old was presented with a plaque at a small, socially-distanced gathering, acknowledging four decades of preparing pitches at the old Central Ground and Horntye Park. 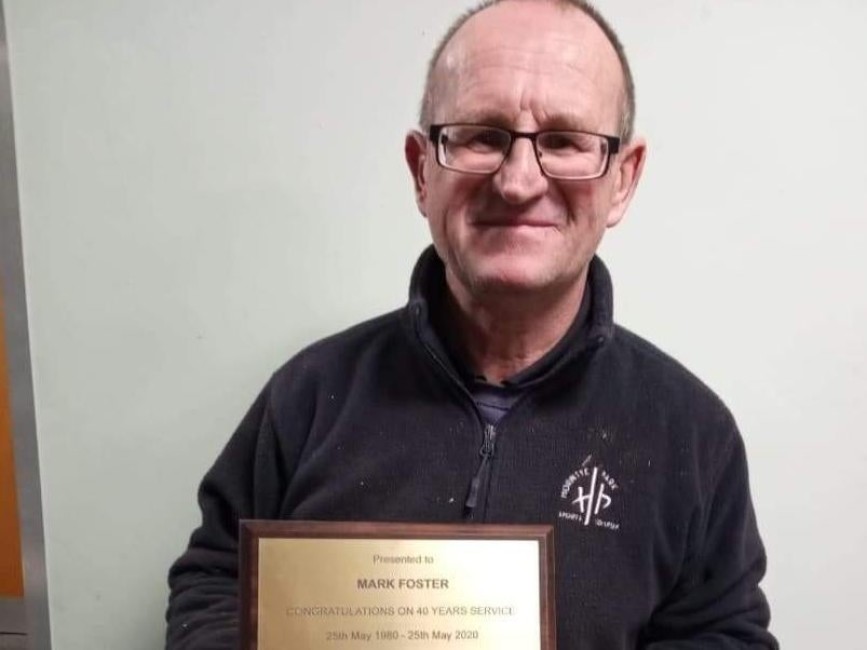 Mark started as a 16-year-old apprentice at the Central Ground in May 1980, earning £35 per week- and admits he stumbled into the role, saying it wasn't a career he planned.

He said: "It happened by chance, I had no real interest in it at all. I did try gardening with the borough council. I was second choice, but the other fellow barely lasted a week. I had no real ambition to do the job."

Mark, brought up in Ealing before moving to Hastings aged 12 in the hot summer of 1976, admits the early days in the job were particularly testing.

He continued: "It was difficult to say the least. The fellow I worked under was a tough one and because of the number of games that used to be played, it was a more hectic season. It was a bit of a baptism of fire. I toughed it out then and you get accustomed to it. I managed to see it out and just kept ploughing on."

Mark says the initial challenges were compounded by a lack of machinery - it would take the best part of a day just to mow the outfield.

But with Sussex County Cricket Club playing at the Central Ground just about every summer, working there provided Mark with some happy memories.

He recalls England great Derek Underwood scoring his maiden century as a nightwatchman in a Sussex-Kent game, seeing Sri Lanka during their early days as a Test-playing nation and a formidable Middlesex - his home county - coming to town in 1989.

Those days sadly passed, however, as the Central Ground closed to make way for the construction of Priory Meadow Shopping Centre and a new cricket facility was created at Horntye Park in the early to mid-1990s.

Mark says the move to Horntye meant working with slightly more up-to-date machinery on a new square at a venue with far better drainage than the Central Ground, which was prone to waterlogging.

Although there have been some second-team fixtures, Sussex first-team matches were far less frequent at the new ground.

Zimbabwe visited for a one-day tour match in 2000, there was a one-day game against Kent in 2001 and a further one-day clash against Essex in 2008, though that was abandoned in the rain.

There were several exhibition matches in which Hastings Priory played against some greats of the game representing the Lashings World XI during the noughties. 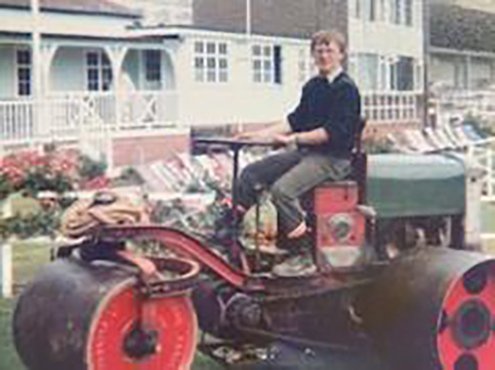 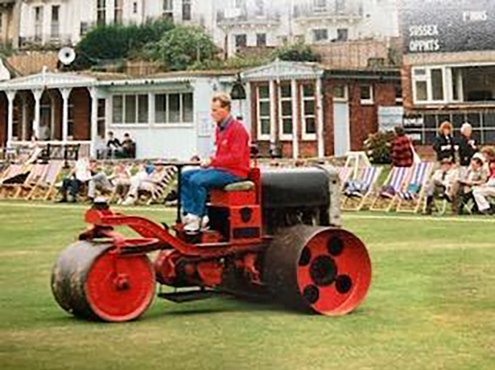 Mark on the rollers

His most vivid memory from those is of express Pakistan bowler Shoaib Akhtar shattering the helmet of Priory batsman Andy Cornford with a bouncer in 2002.

A personal highlight for Mark was winning the Sussex Cricket League Groundsman of the Year award in 2003, beating off stiff competition from the likes of Horsham.

Mark added: "I've not done too badly. I've brought a few people into the game and kept them going as well - the ones that have wanted to do the job.

"It's been nice to work with the volunteers, like Leggy (Dave Legg) and Knocker (Noakes) when he was alive, and give them a bit of advice."

Mark said the gathering to acknowledge his four decades of service wa a complete surprise - and he's still not quite decided where to place his plaque.

It's very much a case of 40 not out because the Brentford FC fanatic, previously presented with two paintings of Lord's for reaching 25 years, intends to carry on for a few more years yet.

He added: "It's rewarding because everything's still a challenge - that's the thing.

"The technology side of it's gone through the roof, the stuff you see now that grounds-people are using blows you away. But I certainly don't envy the future grounds-people."

Graeme Mounsey initially employed Mark after he left school and was among those at the presentation.

He said: "He came to us from The Grove School, Alan Grant was his teacher there. He's a lovely lad and we're very proud to have employed him. He's very conscientious and he'll do anything you want him to do."

Hastings Priory coach Ian Gillespie, who scored plenty of runs on wickets prepared by Mark, was also present for the ceremony. He said: "I do remember him starting out with Jim Case as a fresh-faced apprentice. I was at university then and playing in the Priory first team when I was back, playing midweek and weekend games at the Central Ground. So he's been around through the large part of my cricket career.

"It was very clear from the outset that he really enjoyed his job, he loved working outside on the ground. Jim Case thought the world of him. He said to me on a number of occasions what a bright prospect he was as a groundsman, and valued his work and his company."

"From there it was clear he had the passion for the job and he's learnt along the way. He's now considered to be a very knowledgeable groundsman and one that people across the county would turn to as someone who knows just about all there is to know about preparing wickets. "You can't remember Horntye without Mark there sitting on the roller, cutting the grass. He's become a permanent fixture, like the pavilion and the scoreboard."