Delabole Cricket Club has appealed once more to St Teath Parish Council to be allowed to keep their plastic posts around the cricket square. 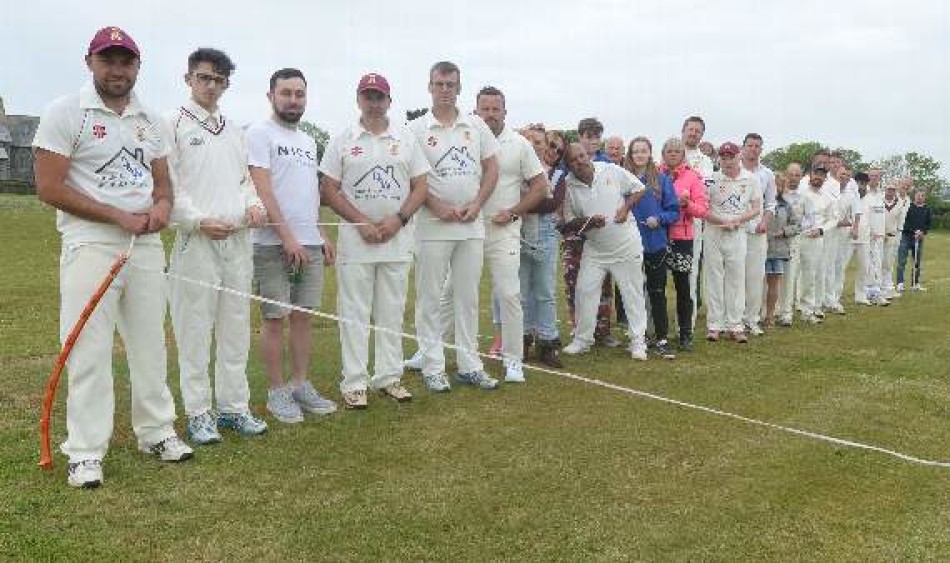 Delabole cricketers and their supporters stand by the existing posts. Picture: Adrian Jasper

The North Cornwall side, who run one Saturday team in Division Four East of the Bond Timber Cornwall Cricket League, play their home fixtures in the village park; a busy area for the community.

However, the posts serve an important purpose as club secretary and groundsman Glen Burrell explained: "Our square is in middle of a public park and we have fencing to protect the square from foot traffic and bikes because although there's a path through the park, our square is on a direct line from each corner gate. Also, with the football pitch beside, we don't want footballers running all over it. Even though it's not a substantial fence it is a deterrent.

"We are not prepared to work on the pitch all week for it to get damaged. Unless people are involved in cricket, they do not realise the importance of fencing off the cricket squares, the preparation that goes into it, and if it does get damaged it could lead to forfeiting games due to the danger to cricketers.

Glen says that St Teath Parish Council keep giving different reasons as to why it should be removed and the square left unprotected.

He said: "Twice it has been voted to be removed. After a vote last year to remove it, we had a meeting with the open spaces committee, which is a sub-committee of the parish council, and agreed to change to plastic posts and thinner light weight tape as a compromise and they seemed happy with what we had done.

"But a couple of councillors weren't happy and brought it up again without our knowledge at a meeting that not all parish councillors attended. It was voted to take it down again, so now we've put an appeal in, which we're in the process of doing.

"They've never invited us to talk about it and explain the health and safety implications, they just voted to take it down. We could explain to those without any sport knowledge the rational before it was voted on. I feel that would of been the right way to go about it."

When asked where the club goes from here, Glen said: "We have had a good meeting with the chairman of the parish council, Tracey Kingdon, and she's agreed to act on our behalf and take our appeal to council passing on all the information we have gathered including our risk assessment, public liability insurance, petitions that we have had running since Saturday (May 11), photos of other squares roped off on public parks, an email from the county pitch advisor Simon Johnson and an email from another club with similar facilities.

"We've had a good response from public getting over 500 signatures in four days on our online and paper petition, and lots of other clubs such as Truro and St Stephen have been posting comments and sending pictures in support.

"As a small village club, we appreciate any support we can get, and hopefully they'll see sense and vote in our favour next month."

When asked what it would mean if the posts had to be taken down, Glen said: "We've worked hard to keep our club going each season struggling for players and feel we should be getting the support from our parish council as we have in previous years. It's not all of them, some do support us as it's hard enough as it is running a village side in the current climate for sport."

"There are lots of teams struggling and like I've said to them, we just want to play cricket. I'm thinking of walking away from it myself and I've done more than most to keep this club running."

A parish council spokesperson said: "Delabole Cricket Club has appealed against the parish council's request to remove the fence around the cricket wicket. The parish council are now reviewing the facts on this matter and by a special motion tabled by councillors, the matter will be brought back to the agenda for the next full council meeting."