The Walkers Stadium is the home of Leicester City Football Club. Completed in 2002, it is a stone's throw from the club's long time home, Filbert Street, and has a capacity of 32,500. 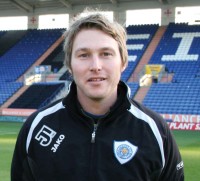 Head Groundsman is Ed Mowe, one of a group of young and talented groundsmen making their way in the industry. Ed has overall responsibility for the stadium pitch and the training ground and is supported by a team of four; Simon Gibson, Paul Billington, Andy Oakes and Tom Rowley.

The stadium's 'wrap around' design creates the usual problems of light and shade but there is plenty of space around the edge of the pitch allowing easy access for machinery and personnel.

Ed has been Head Groundsman since 2002 having previously worked at the old Filbert Street stadium. He oversaw the installation and growing in of the new pitch, constructed by Hewitts, which is sand based with under soil heating and a fully automated pop up watering system comprising of three sprinkler heads on the pitch and a further ten around the perimeter.

Due to late fixtures and corporate events, Ed did not begin his end of season renovation until the first week in June. This involved koroing down to a depth of 40mm, importing 500 tonnes of MM35 sand and ameliorating into the top 100mm. 200 tonnes of Fibresand was imported and mixed down to 75mm. The pitch was then relevelled, decompacted using a vertidrain and overseeded and fertilised using 400kg of Advanta MM25 seed and 400 kg NPK 12:3:9.
All the work was completed within ten days.The pitch was then covered with germination sheets with the first signs of grass showing within four days. The germination sheets were removed after seven days.

Soil analysis is undertaken three times a year to monitor the nutrient status and soil Ph of the pitch profile. Soil Ph results for 2008 were: March 4.7, July 5.0 and November 6.2.

With sand based pitches being prone to leaching a robust fertiliser programme has been instigated at the ground.

Sand based pitches have a tendency to compact over time so it is important to control the level of compaction by regular aeration practices. Care is taken not to over aerate as this can destabilise the pitch. The pitch is aerated, roughly every three weeks, using a SISIS drum spiker. Deep aeration is carried out as required with the SISIS Javelin AerAid.

During the season the pitch is cut at 25mm, slightly higher during December and January at 27mm, using Dennis Premier mowers. After each game Honda HRD 535 rear roller rotary mowers are used to pick up the debris and give a gentle roll. Divoting is then started and, if required, the pitch will be brushed.

Ed spends a lot of time monitoring the weather and keeping any eye on the soil and air temperatures inside the ground, especially during December and January. The combination of the shade and weather can soon reduce soil temperature, dramatically affecting the growth of the grass.

The pitch is high in phosphate and low in potassium, so little or no phosphate will be added during the winter months, an application of sulphate of potash will be applied to bring up potassium levels. Ed will also apply a little magnesium to help keep the potash to magnesium levels around the correct ratio of between 3:1 and 4:1.

At the start of November the pitch temperature was averaging 6.5OC with an average surface temp of 6.1OC. Because of the freezing weather over the new year period, and because the pitch had been overseeded due to a heavy fixture list of nine games in five weeks, Ed kept the undersoil heating on low and raised the pitch temp to an average of 11.4OC.

This significantly reduced the risk of fixture cancellations whilst, at the same time, kept temperatures favourable for growth.

A Clegg hammer measures ground hardness and works on the principle of dropping a known weight a known distance and measuring the resistance of the impact.

A 2.5kg Clegg hammer is used, taking readings from fifteen locations on the pitch (see plan) Five measurements are taken at each location and the average result recorded.
Readings at the ground have been measured between 60-110 gravities, however the average reading taken over long periods of time tend to be between 75-100 gravities. Ed tries to keep the pitch performing in the high 90s .

h the pyhsio and Ed believe the pitch plays better, and safer, when maintained at between 85-105 gravities.
Pitches become hard when the porosity is reduced. Generally, this is caused when the sand particles compact down tightly upon one another. Some sands are more prone to compaction than others, usually after high usage, which is why it is important to ensure compatibility when topdressing or renovating.

Regular aeration works and controlling the moisture content of a sand profile are essential when managing sand based pitches.
The condition of a sward will also impact on Clegg hammer results. A good sward with a good root system will bind the sand profile together and be firmer.

Clegg hammer results will fluctuate at different times of the year, due to the condition of the turf, grass growth, rain, wind, changing temperatures, usage and maintenance of the pitch.

The two following graphs show the results taken at home and away games. Not surprisingly the home results tend to be more consistent than the away results.

With the Clegg results at the stadium being pretty consistent (85-105) Ed has not had to do any major work to raise or lower them.

Every surface will have its own natural hardness reading. This will be determined by general usage, routine maintenance, watering and weather conditions. If the surface is playing well and retaining stability then Ed does not see the point in over working the pitch. If the pitch was too soft he would do some extra rolling; if too hard solid tining would be in order. At other times these operations could cause more problems of destabilisation to the rootzone, capping of the surface and loss of grass.

At the end of the season Ed will review all the results obtained, which will help him in determining the close season work to be undertaken.

30th October Sprayed with 40 ltrs of Terralift 0:0:15 and 10 litres of Rocastem to help through the wet periods