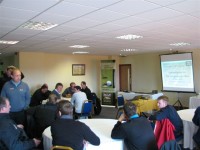 As part of their on-going marketing development, Crocodile Golf Products were delighted to be invited to present their expansive range of quality quality replacement lawn mower blades and golf course accessories to the 'Gingerbread Men' at The Chase Golf Club at Penkridge in the West Midlands earlier this year.

The Northern Division of the 'Gingerbread Men' emerged as a Group of like-minded and responsible individuals whose common goals were to raise the profile of sustainable golf course management and share their ideas and working practices with other, equally receptive greenkeepers. Meeting regularly to view the greens and fairways and the general presentation of each other's course's the 'Gingerbreads' have created a new found enthusiasm through fresh ideas and interaction, culminating in the confidence to see changes progress so that the courses realize their true potential. 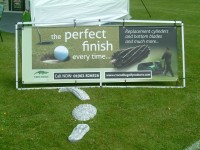 t was as a direct result of this lateral thinking that Jonathon Wood of Enville Golf Club and Simon 'Chalky' White at The Chase, invited Crocodile Golf Products to meet with the Northern and Midlands 'Gingerbreads' at The Chase Golf Club, where, after an extensive and informative tour of the greens and close inspection of the soil profile and turf, Crocodile Golf presented a short video on the production processes involved in manufacturing their range of replacement cylinder blades and bottom blades at their factory in nearby Wolverhampton.

Commenting upon the presentation, Stuart Yarwood said that it was refreshing to see the emergence of a U.K. manufacturer who cared as passionately about the turfcare industry as the 'Gingerbreads' did and who were completely in-tune with the 'Gingerbread' philosophy and ideals. He added that he for one would certainly consider Crocodile Golf Products in the future. 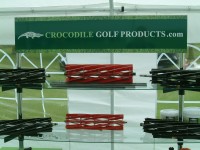 As a result of having met with the 'Gingerbreads' a number of orders have since been received, including one from Penn Golf Club for 3 'off' replacement Toro cylinders via their appointed Redtech service company as well as from Enville Golf Club and also from The Chase Golf Club for the Crocodile range of 4" hole cutters. The Chase Golf Club has also purchased some of the new range of 'Crocodile' Tines.

The complete range of Crocodile Golf Products is available off the web- site.