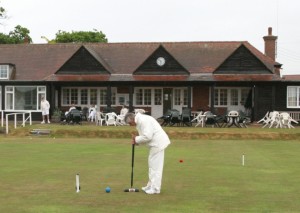 Members of Budleigh Croquet Club have said farewell to their groundsman after 31 years in the role.

Chris Root joined the club two years after he helped to prepare the grounds for a croquet test match between England and Australia.

The club's chairman, Peter Hardcastle, thanked him for the immense contribution his work had made to Budleigh's good reputation in the croquet world.

He said: "Looking after the turf of the club's eleven croquet lawns and six-rink bowling green is an exacting job, and Chris has applied his varied specialist skills to the Budleigh lawns, which are regarded as some of the best in the country.

"Chris will be a hard act to follow. Club members wished him well in retirement when he plans to pursue his interests in music and wildlife photography."

You can read the original article from the Exmouth Journal HERE