by Christopher Hooton
in Industry News
on 17 Jul 2015

Quintessentially British sport croquet is on the verge of extinction, according to new research 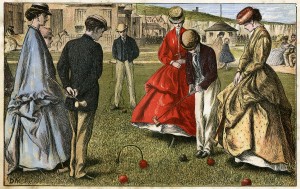 Heathrow and Pimm's formed an unlikely alliance to study the demise of the lawn sport, finding that only 2% of Brits currently play it.

According to The Croquet Association's latest report, which highlighted a 26% decrease in numbers of under-50s over the last five years, the sport will not survive the next 25 years unless it attracts a younger audience.

Croquet dates back to the 1860s and was a highly popular pastime in the Victorian era due to its gentle, slow gameplay.

Despite being lauded as one of the top three quintessentially British sports, alongside cricket and tennis, the research by Heathrow revealed that almost three quarters (74%) of Brits have no interest at all in croquet and one in 20 have never even heard of the sport.

The airport is taking such a vested interest in this news because it is trying to revive the game in Terminal 2.

A fortnight-long pop up croquet tournament has been arranged, updated for the 21st century to include musical hoops and laser-guided mallets.