1 Crossing over for Jordan 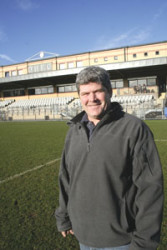 Ian had spent many years working in the sports turf industry trying to improve the level at which he worked, He was finally rewarded in 2004 when he was appointed Head Groundsman at Crystal Palace a job he relished and enjoyed immensely. However, after about a year, Ian had the opportunity to set his own business.

"The driving force behind my decision was that I wanted to provide a better lifestyle for my wife and family" he said. "I was already committed to long hours at Palace and felt that, by being my own boss coupled with my experience and the contacts I had made, I could, potentially, earn a lot more money and be in control of my own destiny. I loved my job at Palace but it was a set wage for long hours."

Since taking his decision, Ian has steadily built up his list of contracts and has managed to treble his turnover.

"Any money the company makes gets ploughed back into the business" said Ian, "by investing in new equipment and resources. I can now afford to employ two fulltime staff, Alan Shardlow and Matt Grice, and a part-timer, Scott Cole. Between them they look after several contracts in the South East London area."
"My very first contract was to look after the cricket and football pitches at Sydenham Sports Club. I knew the club very well having been a regular player and volunteer groundsmen there for twenty years."

"In the early days I would take whatever work was offered. This included quite a bit of domestic gardening work. It was an area that 'just happened', via word of mouth." Steadily, his reputation for quality workmanship was getting around. Ian then picked up the contracts to look after several other sportsgrounds including Dulwich Hamlet, Fisher Athletic and Beckenham Town football clubs.

"It has certainly been an eye opener looking after non-league football pitches compared to a professional one. The shear volume of games being played is staggering. Most of the football clubs we look after have well over seventy games per season."

Last May Ian undertook the end of season renovations at Dulwich Hamlets. This involved Koroing off 15mm of vegetation, topdressing with 100 tonnes of 70/30 rootzone materials and overseeding with Advanta MM60. Granular and liquid fertiliser was also applied.

At the football clubs the sward is maintained at a height of 28mm and mown three times a week during the playing season. Aeration is carried out three times a year with a vertidrain and fortnighly or monthly, as required with a Toro ProCore 648.

Ian also looks after a number of cricket grounds, his latest contract being at Essex Premier League side Wanstead Cricket Club.

"A typical weeks work atWanstead during the season would be a clean and brush up of the used wickets on a Monday morning and, if they were not to be used again, they would be watered down, seeded with MM50 and topdressed with Ongar loam."

"We would then begin preparing two new wickets by scarifying and brushing whilst lowering the height of cut. We can irrigate the whole square with the pop-ups if needed but I prefer to hand water individual wickets before rolling if conditions suit."

"Brushing and cutting the wickets carries on every day during the week and, possibly, verti-cutting the square with our Dennis G860."
"The outfield gets cut twice a week, unless there is a flush of growth and then a third cut is required. The surrounds of the boundary are kept tidye of with rotary mowers and strimmers."

"On Friday we would carry out final preparation with cutting, rolling and marking the wickets out. We cover the wicket from Thursday, or before if the weather is bad. We also prepare two colts wickets every week and have 300 colts turn up on a Friday evening for coaching which is not ideal but we cope. Saturday sees a final cut and roll before the match."

"Wanstead also have a second ground where there 3rd and 4th XI's play so much the same is carried out on that ground as well."

Ian believes that, apart from experience, the key to successful contracting is having the right equipment to do the work efficiently.

One of his latest additions is the Toro ProCore 648 to work alongside his tractor mounted ProCore 660. He has also purchased a Kubota STV40 compact tractor.

To complete his quota of football pitch machinery Ian has just bought a second Dennis G860 cylinder mower, to work in tandem with his other G860 and Ransomes Mastiff looking after the twelve football pitches he now maintains.

Ian also carries out ends of season renovation works at a number of tennis, bowls and crickets clubs in and around the South London area.