"Being able to add the words 'Augusta National' to my CV is not just a thrill, but it can help open doors to many other opportunities" 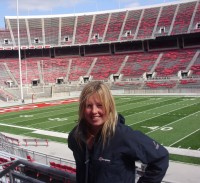 After applying to take part in the Ohio State University international exchange programme never, in my wildest dreams, did I think I would have got such a perfect placement!

It was a real blessing, and a major career milestone, for me to work for six months as an intern at Augusta National, a venue that, in media coverage terms, is probably the number one golf course in the world.

It was quite a long application process. I decided I wanted to work in America back in March 2009, and it was six months later, around September time, that I found out I was actually going.

After my CV had been 'tweaked' by Pitchcare columnist Frank Newberry, it was sent to Mike O'Keeffe who has run the OSU international exchange programme for a number of years. Mike then sent my CV to a number of golf clubs in the 'top 100' in the USA.

Once an internship at the Augusta National became a possibility, the selection process began in earnest. My next step was to write a personal description and complete a number of other forms. This was the 'paper sift' to decide on suitable candidates for interview. Once I was through this phase of the selection the Augusta people spoke to my employer, the Course Manager at Newquay Golf Club.

After having some initial discussions with my Course Manager, the First Assistant and the Administrator at Augusta National interviewed me by telephone. It was during the next week that I was told the fantastic news that I had earned a place on the greens team at Augusta National!

However, it was not all done and dusted at this point. Augusta National had to run background checks on me and I had to sort out a number of formalities, such as my visa application. Only then was I all set for my adventure to the United States. In October 2009 I would start my six months internship. 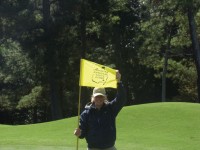 This was going to be such a big move for me. I had never been away from home before. I have only ever had the one proper job, working at the same golf club since I was 16 years old. Now, that same employer had permitted me to go on a six month sabbatical to America.

I had many apprehensions at first. I had no idea what to expect and it seemed like a very daunting prospect to just 'up and leave'. I particularly did not want to let my employer down.

A great experience and an excellent introduction

On arrival into America I met Mike O'Keeffe in Columbus, Ohio for an orientation session, at which he briefed me fully on what to expect on my trip.

I was also told about the short course training, and an educational weekend, organised by Mike and his team, which I was to attend later on in my internship at Hilton Head in South Carolina. I found the course very enlightening, it was a great experience for me and an excellent introduction to the way greenkeeping is done in America.

It was also a good opportunity to mix with other greenkeepers of my age and to learn about their work issues and experiences. Although we were not together long, I still keep in touch with a lot of the people who were on the Hilton Head course.

Is this really happening?

After leaving Columbus Ohio, I got a flight to Augusta where lots of thoughts were running through my mind as to what to expect. As it happened everyone was very welcoming. As soon as I landed, an employee of the Augusta National picked me up from the airport and helped me settle into my new accommodation.

I will always remember being driven through the gates and thinking 'Is this really happening?'

After only a couple of weeks of settling into my internship I was given my main duties. I was scheduled to do a task known as 'Greens Care'. Basically, this meant caring for two allocated greens on a regular basis and setting them up before morning play.

This usually involved mowing the greens and then raking the greenside bunkers. Following this, with any extra time, I would repair pitch marks, dust ball marks and pick any poa annua.

When raking the bunkers I would also take the time to pick any weeds, check sand depths and remove any debris from the bunker and surrounding areas. Generally, if I was not scheduled for a greens care task in the mornings, then I would be doing spray applications instead.

An extra effort to improve the holes assigned to me 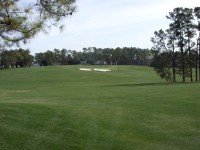 After the morning tasks were completed I would normally be assigned to 'Hole Care'. This involved taking responsibility for the general maintenance of two holes, and then putting in an extra effort to improve the two holes assigned to me, these were holes 1 and 9.

Each green was 'looked after' by whoever was allocated that green under the 'Greens Care' system, and the large areas - such as the fairways and the large strips of second cut - were cut by a team of people on ride-on mowers. Everything else was my responsibility.

For example, if I thought it would improve turf quality to mow any parts of these large areas using pedestrian methods, I could decide to complete the task personally and take it upon myself to rope off specific areas.

The main mowing duties on my allocated holes involved using a pedestrian rotary mower to finish the second cut areas, in and around the trees, and the grass areas around the bunker fingers to blend in with the fairway. This work was necessary because the ride-on mowers cannot adequately reach into these areas.

Once I was satisfied that these areas were in an acceptable condition, I was left to tackle other issues that I thought might benefit the holes. This could involve a number of different tasks including topdressing, overseeding, aerating etc.

My eye soon adjusted to spotting the early signs

Whilst I was constantly encouraging the growth of new grass, it was very important to keep the already established grass alive. A main concern was 'wilt', and it was a constant battle to keep on top of this, although my eye soon adjusted to spotting the early signs. After a time I got to know 'hole care' really well and, because I was constantly observing the same two holes, it made it possible to fairly easily identify changes or deteriorations, and deal with them quickly and effectively.

enerally speaking I was left to make all the decisions about holes 1 and 9. However, course walks would be done every day and direction would be given, if necessary, but it was always nice to stay one step ahead of the game.

For me the whole concept of 'hole care' was just excellent. It has definitely improved my attention to detail and given me an increased sense of pride in my work. This drove me to ensure that the two holes that were my responsibility were the very best that they could be.

I benefitted greatly from 'hole care', I learned a great deal, especially about personal 'ownership' and responsibility. I learned how to manage my time and work as efficiently as possible. I found being given the responsibility very rewarding; to me it was like being the superintendent of my own small golf course.

All the work for the Masters was completed to an amazingly high standard, and the lead-up to the tournament, held in April 2010, was very exciting. A lot of hours had to be worked and a great team effort was needed and given.

By the time it actually came to the Masters, it seemed rather surreal to me that my internship was about to end.

I have to find ways to be better than the competition

Now, more than ever, I realise that travel and networking are key parts of my career development. Being able to add the words 'Augusta National' to my CV is not just a thrill, but it can help open doors to many other opportunities.

Times may be tough at the moment, with tax increases and government cutbacks, and I know that I inhabit a small part of a very big world. As far as my career is concerned, I also know that a lot of good people will be competing for the better jobs, and I have to find ways to be better than the competition. I need to be better educated, better travelled and better prepared if I am to get the right jobs in the future.

I also feel a great loyalty to my home club at Newquay, who have again permitted me to seek another sabbatical this coming winter. It is great that they want me to have the very best vocational education, networking opportunities and career prospects. I will always be grateful to the Newquay Golf Club for their fine example as employers, their encouragement and their operational flexibility.

I was very sad to leave Augusta. I enjoyed my work there very much and made lots of great friends. I found leaving the most difficult part, but it was definitely the experience of a lifetime. I would recommend an internship like this to anyone who loves greenkeeping.