Malibu-style surf culture has arrived at three Crown Golf clubs, with the trial introduction of GolfBoard rentals at The Hertfordshire, Paultons and Sherfield Oaks 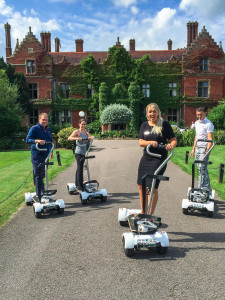 All three venues took delivery of their GolfBoards last month, and dozens of golfers have already given the innovation the thumbs-up.

The brainchild of fitness tycoon Don Wildman and big wave surfing legend Laird Hamilton, the GolfBoard has been proven to dramatically speed up pace of play, with rounds of golf averaging under three hours.

A GolfBoard is essentially a large, four-wheel motorised skateboard. You mount your golf bag on the front, grab the vertical handle, and speed off down the fairway leaning left and right to steer. GolfBoard devotees call it 'surfing the earth'.

"Early feedback from our golfers is that 'golfboarding' is a lot of fun, and I have to say that I agree" said Crown Golf CEO Stephen Towers after taking his GolfBoard for a spin. "Yes you can play much faster, which is good for everybody, but even more importantly the GolfBoards are creating more smiles, more laughter and more enjoyment whenever golfers jump on and start to ride".

Simon Blanshard at Paultons Golf Centre in Hampshire said: "Golfers start out sceptical, but they come back every time and people are now coming here to play just because we have GolfBoards to rent".

"GolfBoards make golf fun, even if you happen to be playing badly!" said Richard Woolley at Sherfield Oaks Golf Club, also in Hampshire. "They bring a new dynamic to the sport and I'm sure they will continue to be popular".

"We're all excited about them" said The Hertfordshire's Chris Purser. "They definitely add a fun dimension to every round of golf".

With safety in mind, golfers are asked to perform a supervised figure-of-eight manoeuvre in an open space when they first rent a GolfBoard at a Crown Golf club. They must also watch a GolfBoard operations video prior to their first rental, and there is also a disclaimer to sign.

The GolfBoard trial at Crown Golf lasts three months, and if it is successful the group plans to roll out GolfBoards across more venues in 2016.