The first part of a two-part article reviewing the processes of identifying soil physical problems and the design of a corrective programme using appropriate cultivation techniques based on a scientific understanding of symptoms.

The soil in most putting greens in this country is far from ideal and, as an alternative to costly and disruptive reconstruction, most course managers try to improve the performance of the soil through a programme of cultivation. Each situation has a distinct set of characteristics that require accurate diagnosis. Course managers should examine their own unique situation before deciding on a particular piece of equipment or course of action. 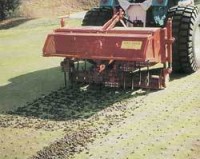 There is never a panacea for all soil ailments, no matter how good the piece of equipment.

Planning an optimum programme involves a number of stages. Firstly, what is the problem, or problems, that needs to be corrected? In some cases, the overall poor state of the green may result from an assortment of deficiencies and each fault may need individual attention. Secondly, what equipment is the most appropriate to alleviate the identified problems? Where there are a number of causal defects, a range of equipment with differing actions may be required. Remember that there is never a panacea for all soil ailments. And thirdly, what intensity of treatment with appropriate equipment will be needed to achieve the desired improvement? The latter point will include timing and frequency of operations based on prevailing weather conditions, state of the soil, and degree of acceptable disruption to play.

Detailed inspection of the turf and soil is necessary to identify the problem or problems that may exist. Major problems can vary significantly from one area to another, even though the general symptoms of poor turf colour, low shoot density, restricted rooting, susceptibility to environmental stress, high disease incidence, and surface ponding may be common to all. Some conditions are easily identified. Examples include excessive thatch accumulation, or layering in the soil profile resulting from siltation from flooding, faulty construction, or inappropriate topdressing programme. Severe soil compaction, be it at the surface or lower in the soil profile is also usually easily identifiable. However, moderate compaction is not as easily discernable and may require close inspection of rooting and moisture movement to locate the zone of compaction and its severity. A soil probe can be used to locate a hard pan in the soil or physical impedance to rooting may also reveal the problem.

Some problems are easily identified.

All too often, inexperienced turf managers jump to conclusions without adequate diagnosis. Consequently, inappropriate actions may be taken in an assumption that a treatment will be effective. In some instances, not only is the treatment ineffective but the problem can actually be aggravated.

Where a green is constructed from fine-textured soil, identifying the causal problem is generally straightforward, whereas problems associated with high sand content constructions can be much more complex. For instance, it is not uncommon to find sand-based greens built to a perched water table specification that appear to drain rapidly, yet display shallow rooting, weakened turf, and the presence of black layer. There may be no signs of compaction, little thatch, and no visible surface water. Close inspection of the rootzone will often reveal that the material is saturated throughout its depth. Generally, unsuitable sand or an inadequate depth of rootzone material causes such a condition. Where the depth of the sand rootzone is less than the critical tension or air-entry pressure of the material, the pore spaces remain full of water, air cannot enter at the surface, and the rootzone material remains saturated. Such a problem is generally a construction fault and must be rectified by means other than cultivation techniques.

Reconstruction may be necessary.

Some suggestions in the identification of soil physical problems are:

Layering of thatch and topdressing can seriously interrupt downward movement of water and restrict root development.

Dug profiles can reveal all sorts of problems.

Some common problems that are either unidentified or incorrectly diagnosed are those that result in water ponding on the surface of a green. Basically, ponding occurs where the infiltration and percolation rates of a soil are insufficient to cope with the quantity or rate of precipitation arriving on the surface. It sounds simple but can be much more complex than it first seems.

A relatively thin surface layer of compacted soil or excessive organic content can cause the symptom; a fine textured rootzone material to depth can also display similar symptoms; an impervious layer within the profile can interrupt downward flow; or excessive extraneous water flowing from adjacent ground can also display the same signs. The faults are all different and require different treatments. Failure to correctly diagnose the problem can result in inappropriate treatment and, unfortunately, may further aggravate the deficiency.

For example, if it is assumed that the cause of the problem is a fine textured rootzone material compacted to depth; deep cultivation with a Verti-drain may be an appropriate treatment. However, if, in fact, it is merely a compacted layer at the surface which is causing the problem, deep cultivation would be inappropriate. Indeed, it might even create an additional problem of compaction at depth if executed when the soil is in an unsuitable state, i.e. when wet and susceptible to structural damage.

The highly acclaimed annual National Turfgrass Foundation 'In Pursuit of Excellence' Conference that has been staged in Southport for the last three years is to be relocated to Blackpool this year.

With its continued aim of up-marketing the event and encouraging closer collaboration between turfgrass associations, the NTF will be holding the Conference at the prestigious Hilton Hotel, Blackpool from 5th to 8th December 2005 inclusive.

Conference organisers said, "Blackpool, still the biggest tourist attraction in the UK, is a great conference town with a wide diversity of attractions and accommodation facilities. No wonder it has been used by the main political parties, international companies and leading organisations as a major conference venue. It's easily accessible by road and rail, and the local airport has low-cost flights linking many major international airports in the UK and Ireland".

The format of the Conference will continue to provide the high quality of advanced education that it has become recognised for. World renowned speakers consisting of agronomists, consultants, researchers and top-class turf managers will share their know-how and experience to provide a unique blend of technical excellence and informal discussion on pressing and topical problems facing the turfgrass industry.

The quality of the speakers is matched by the quality of those attending the event. Leading turf managers in the fields of golf, winter sports and amenity turf, from all over Europe and the USA further enhance the learning experience and often test the wit and knowledge of the speakers. The NTF and its sponsors have always created a relaxed, friendly and enjoyable atmosphere that encourages plenty of dialogue between all parties and Blackpool promises to be an ideal venue to further its aims.

For Conference brochure or further details of the event please contact: