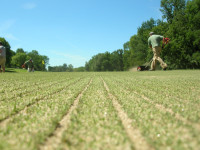 Physically, compacted soils increase in bulk density due to an increase in the solid particles at the expense of the air porosity. Although on finer textured soils the total porosity is greater than found on sands, in improving the environment for turfgrass growth it is the macropores that are important. By mechanical cultivation, golf course superintendents attempt to increase the amount of macropores, which reduces bulk density and increases hydraulic conductivity.

High sand content sand soils are more resistant to compaction than finer soils. However, organic matter accumulation on sands can reduce among other things hydraulic conductivity, and water infiltration. The lack of water movement, and the resultant saturated conditions that can exist in the top layer of sand soils high in organic matter has been associated in the southeastern United States with summer bentgrass decline.
In developing a cultivation program enhancing water movement (infiltration rate measured as saturated hydraulic conductivity) through the soil and correspondingly increasing the soil oxygen levels is the desired goal. A desired management program will incorporate coring, verticutting, and topdressing in some combination. 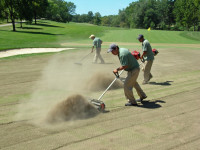 Coring or as it is often termed aerification, is the removal or the process of producing a hole in the rootzone through the use of a tine or spoon. Coring is based on three factors depth, spacing and diameter size of the tines. Traditional coring tines have a length of approximately 6.3 to 7.6 cm. In most golf course rootzones and soils compaction, as measured by bulk density, occurs in the top 7.6 cm.

In some instances compaction occurs at deeper depths 8 cm or deeper. Additionally, continual coring to a given depth can result in a thin zone of compaction just below the coring depth8. Although thin, the resultant compaction zone can inhibit root and water penetration. To combat deeper soil compaction issues, longer tines, and drills have been developed to allow for 20 cm or deeper penetration.

Tine diameters range from 6.35 mm to 25.4 mm (1/4 to 1 inch) or more. Smaller diameter tines below a 6.35 mm size no measureable benefits have been reported. The combination of tine diameter and spacing greatly impacts the surface area affected. For example, coring with 12.7 mm (1/2 i From both a soil compaction and organic matter management perspective, hollow tine coring in conjunction with topdressing (sand) is effective. On high sand content greens, hollow tining and then filling with sand topdressing improves water infiltration as measured by hydraulic conductivity, for 5 to 8 weeks, and minimizes organic matter accumulation. Non-filled holes of at least 6.35 mm in diameter did improve infiltration rates immediately but the effects decline overtime. In general, the benefits from not filling last less than half the time compared to sand filled holes on high sand content greens.

Root length and mass are enhanced overtime by coring. However, in the short-term root hairs and roots in general can be injured with coring. The drier the soil conditions, the greater the likelihood of damage. When coring during stress periods, make sure the soil moisture levels are adequate, and, probably not a concern in Ireland, that soil temperatures are not high.

If we were suggesting a core cultivation program for creeping bentgrass and/or Poa annua sand based greens in Ohio, USA, it would be an initial coring in the spring when the turf is actively growing (promote turf recovery). Core with hollow tines of at least 12.7 mm in diameter in conjunction with sand topdressing to fill the holes. Five to eight weeks later, we would start coring (quadra-tines, or hydrojecting every 3 weeks or,
as conditions dictate, topdressing when possible (at least lightly for the organic matter management). In the fall - hollow tine and fill the holes with a topdressing program.

Due to concern of disruption of playing surfaces, solid tines are popular for both deep and small diameter coring. Solid tines do provide relief to soil compaction but in general not to the same degree as hollow tines. Solid tines can vary in shape (ex. "pencil", "star", etc.)

The Toro Hydroject® pioneered the use of water under high pressure to penetrate and fracture the soil profile. As previously mentioned, the Hydroject can be used as tri-weekly cultivation similar to quadra-tining. Recently, the development of Dry-ject® using high pressure injection of sand has become popular. The Dry-ject, analogous to coring and topdressing to fill cores, should be done when the turf is actively growing (spring and fall) allowing for root growth and development recovery.

Aggressive verticutting (i.e. Graden®) is a practice used for surface layer removal of organic matter. Verticutting removes more organic matter from the surface 2.5 cm than coring, but also removes a disproportional amount of plant debris, and the turf recovers much slower. Regarding blade diameter, there is little difference between 1 and 2 mm blades in the amount of organic matter removed. To improve recovery time and replace potential sand loss, these high speed verticutting units have developed sand re-placement units. Verticutting in combination with coring and topdressing has been effective in controlling organic matter accumulation in creeping bentgrass including newly established greens.

Cultivation, including an integration of coring, verticutting, and topdressing, are critical in maintaining healthy putting greens through improving water movement and soil oxygen levels by relieving soil compaction and reducing excessive organic matter accumulation. Given that play can be affected, and thus pressure to minimize the number of cultivations per year, knowing whether your turf is suffering from compaction or excessive organic matter or both dictates the management program.