by Rosie Duckworth
in Industry News
on 30 Aug 2015

Cumberwell Park Golf Club, near Bath, has invested in Toro for the first time in a £½m five-year deal 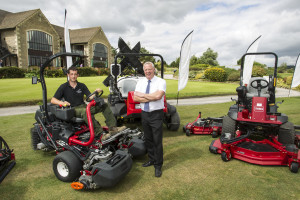 After 26 years with the same machinery brand, making the decision to change was a big one says course manager Matt James and it forms part of a new phase to increase the quality of the course as the club continues on as host to the PGA EuroPro Tour.

"Every year now we open our gates to the world as the EuroPro cameras start whirring," says Matt. "We have always maintained excellent standards but with another 9-hole par 3 course under construction and the tournament returning in 2016 raising the club's profile, it seemed the right time to re-evaluate our machinery, and we felt Toro had the edge on quality.

"It's important we produce the finest surfaces possible and when you know Toro takes care of the best of the best at the likes of Wentworth, it's the highest kind of recommendation."

In year one of a five-year partnership agreement, the club, which boasts Wiltshire's only 36-hole golf course, has taken receipt of a Greensmaster TriFlex 3400-D, Reelmaster 5510-D, Groundsmaster 4000-D, SandPro 3040 and a Multi Pro 5800-D.

Matt and his 18-strong team had the chance to put the new equipment to the test in the run up to and during the 2015 EuroPro Tour. Matt has been particularly impressed with the TriFlex 3400-D and its precision cutting saying, "The TriFlex 3400-D has been great for tournament prep. The extra quality from the cutting units on the greens was really noticeable, as was the grooming ability of the 3040."
Matt has also been impressed by the support from Lely Turfcare, which he believes adds value to the deal. "It's been great having the support of Lely and in particular Rob Rees," he says. "They provided tournament support in the shape of extra machines and advice throughout the purchasing process. For example we knew we needed a fairway mower but Rob stepped in and recommend the correct blades for how we cut our fairways. It's been a real benefit to have that level of service."