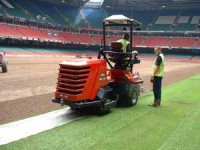 "We started harvesting on Saturday 8th May before the Welsh Rugby Union's Konica-Minalta Cup Final kicked off at the stadium at 5.30pm," says Lindum's MD Stephen Fell. "As soon as the game was over our six man laying team, from specialist sports ground contractors Kestrel Golf and Sports, stripped the pitch, working through the night, ready to receive the first lorry loads of turf which left here at dawn to be laid in Cardiff from Sunday lunchtime onwards."

From then on in, up to 10 lorry loads per day made the journey in a continuous shuffle. Harvesting started 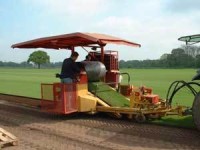 Rachel Atkinson, who has been with the company since 1994 and saw the first turf leave Lindum for the Millennium Stadium in 2001, is in charge of co-ordinating the haulage.

"We've been using local firm Rhodes Haulage for all our major projects over the last six years and everybody's got used to each other," she says. "Because there are so many wagons needed at the same time you've got to use someone who's quite big and you can't have people letting you down. My worst fear is of wagons not turning up."

Production Manager John Stannard, assisted by Roger Moore is in charge of the gruelling harvesting schedule, which lasted at the Lindum end until Monday evening (10th May), with the final turf cut at eight pm.

"We were looking at 16 hour days when all you do is work eat and sleep," he says.

"The whole point of this operation is to ensure that within 6 hours of harvesting the turf is laid onto it's new root zone," explains Stephen Fell. "Our American Bucyrus Harvester which we bought in 2003 not only cuts rolls 1.1 metres wide and 15 metres long which makes the process quicker, but it handles the turf much more gently. We always aim for the minimal amount of stress between lifting and laying." 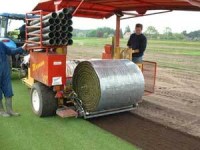 "This machine is less labour intensive," says Billy Martin, Sales and Marketing Director for the company. "Normally, with a project this size we'd need 10 or 12 people, but the fact that it can lay turf up to 1.2 metres wide, at a much faster rate means that using our 6 man squad, the laying took half the normal time."

Bad weather in Cardiff didn't affect the laying process as the 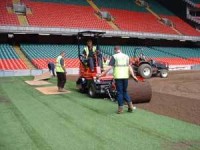 "Rain doesn't matter," says Stephen Fell, "we're on free draining sandy loam here and the harvester can carry on. We cut the last order for the Millennium Stadium in the first week of February following the big freeze, when we had torrential rain coupled with melting snow. It made the process difficult, but by no means impossible."

Having supplied new surfaces for the Cardiff venue twice in the last ten months, Lindum have the process well under control. "Traffic can be a problem," admits Fell, "but with so many lorries on the road at any one time, if one of them breaks down it's not disastrous."

The Millennium pitch's new surface was in place by Tuesday evening, 11th May, giving it ample time to settle before the big match.

For further information on Lindum Turf, contact the company on Tel; 01904 448675 or visit their website at www.turf.co.uk