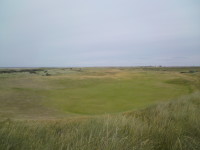 When Northumberland course Goswick Links became a British Open regional qualifier venue back in 2008, head greenkeeper George Thompson called in Barenbrug's David Greenshields for expert advice on how to get the course in pristine condition.

Having worked with various grass seed companies over the years, George switched back to Barenbrug after consulting with Barenbrug's regional manager for northeast England, Cumbria and Scotland, David Greenshields, and his consultant STRI agronomist Henry Bechelet in order to get the course in pristine playing condition. What's more, George needed a mixture that would withstand some extreme climatic conditions.

After trialling a number of custom-blended mixtures, David and Henry found the perfect solution to the Berwick-upon-Tweed course's requirements. As George explains: "We're located in the far northeast of England on the coast and the course is subject to some really cold and strong north-easterly winds so we just couldn't get the sward density we needed as a result. But after a successful trial, Henry and David recommended a special mixture that has come on in leaps and bounds since we first overseeded."

Goswick's custom solution contains a blend of three Barenbrug-bred slender creeping red fescues - Viktorka, Barcrown and Barpearl. David says that the combined strengths of these cultivars was key to finding a blend able to cope with the course conditions. "This mixture was specifically designed to provide superior salt tolerance for fescue-dominant greens on links and seaside courses exposed to salt spray and salt-laden winds. By combining these cultivars, we were also able to provide unrivalled shoot density from a 100 percent fescue blend under regular close mowing regimes down to 4mm."

Thanks to a combination of the greenkeeping team's hard work together with David's expert advice, the results have exceeded George's expectations: "One of the main benefits the new mixture brings is that the course doesn't dry out as much because we've got much better drought resistance now. It also keeps its colour without being too green - it's just the right balance. All in all, it looks great and performs really well."

And, having hosted a successful regional qualifier earlier this summer prior to the 2010 Open Championship at St Andrews Links, George says the mixture did him and the club proud. "It was a tremendous day and the course performed very well. We achieved excellent green speeds of between 10.2 and 10.5 and some strong afternoon winds made for good, challenging conditions for the players. It was a great success."

Image: Goswick Links switched back to Barenbrug grass seed when it became a British Open regional qualifier venue to help it get the course in perfect playing condition.