Entering the 'Short Cut' debate is Ricky Willison, Club Professional at Ealing Golf Club. Ricky is a former Walker Cup player, who played in the 1991 match that also featured Phil Mickleson, David Duval and Padraig Harrington amongst others. He also competed on the European Tour for several years and now has his seniors card.

He has been intrigued with all that has been written and spoken about since 'The Short Cut' debate was started by his Course Manager, Greg Evans, two years ago. From personal experience, he has seen what Greg has achieved over several years and feels the negative comments that he has read or heard are most unfair and, sometimes, factually incorrect.

Here he gives his views, but from a different angle - the customers one! He also invites readers to come and visit Ealing Golf Club to judge for themselves

I am writing in response to the debate that our Course Manager, Greg Evans, has caused within the greenkeeping industry over the past two seasons. I noted that there was a recent article in the Pitchcare magazine criticising Greg's methods. There have also been several other experts from different publications expressing serious doubts about Greg's grass management skills.

I myself am no expert in this area, and, therefore, cannot pass judgement on whether Greg's position in these matters is correct. However, I am going to attempt to answer all the doubters in an area that I do feel I can talk about; playing golf. 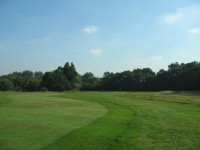 I have played all over the world, from Open Championships and European Tour events, to Pro-Ams. From competing in top amateur events to taking weeks away with the members. I have organised corporate events, taking companies to top destinations and so on. I also spent time working in the golf design business. All in all, I have been involved in the golf industry for the past 35 years. My current position is as the Club Professional at Ealing Golf Club.

Now, it won't come as a surprise to anyone that the overriding conversation in most clubhouses up and down the country is about the condition of the golf course. I think it is also fair to say that most of us golfers do not really care how the greenkeeper maintains the golf course, as long as we get quality. Greens, tees, fairways and bunkers need to be in superb condition all year round, or we have something to say about it! Most of us have not got a clue how difficult it is to produce the kind of course we want - firm, fast greens, fantastic fairways and lots of definition. Just like the courses we see on the TV, fifty-two weeks of the year!

Condition, I believe, is by far the most important aspect of the golf course. You can play a fantastically designed golf course but, if it is in poor condition, then most golfers will be disappointed. However, play a poorly designed course in great condition, and we will enjoy the day and, more than, likely come again!

So, the emphasis is on course managers and agronomists to provide a course in great condition, because the number one concern is pleasing the customer, the golfer.

Having worked with some amazing agronomists and course managers in my 'course design years', I am disappointed in the recent comments regarding our Course Manager, Greg Evans, and felt I had to respond.

It is true to say that Greg is a friend. However, when he came to Ealing (highly recommended by a respected agronomist from Ireland), Ealing was in dire straits. The condition was dreadful and, as a consequence, membership, green fees and societies were all way down at a time the club could ill afford. At the job interview, he promised to turn it round in six months. He did, and four years into the job, the course just keeps getting better and better.

He has certainly delivered on his promise, and more. He has five full time staff at Ealing and runs the course on a very modest budget. He is very professional and is always looking for new ways and ideas to improve himself and his staff. As a consequence, most jobs remain 'in house' and every year he has been here, he comes within the budget set by the club. He is always accommodating and happy to share his ideas. 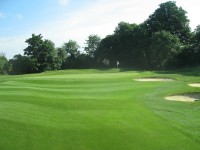 We are starting to get many golf clubs come along with their course managers to see and ask how he does it, including one of the very best clubs in the country, Sunningdale. Most are very impressed, nearly all are surprised at how good the condition is, and the majority are complimentary. He deserves it, and so do the board and members of Ealing who trust and believe in him, as does the agronomist from Ireland who recommended him.

So, what is it like to play golf at Ealing? Well, from November though to February, we have NO temporary greens and NO mats. We also do not put the tee markers all next to each other, at the front of the tee. We do have frost delays and, at times, a trolley ban. But, all in all, it is pretty much like most hundred year old London clay based courses with little to no drainage. When it's pouring with rain on those clay surfaces, sometimes it is no fun at all!

But, when the weather improves, it is fantastic! Always in superb condition and a joy to play. The greens are as good as any I have played to or putted on in the world. Fast, firm and true! They read between eleven and thirteen on the stimp meter. The fairways, tees and semi-rough all have clear definition and are presented in great condition. I know that some of the experts say it is only set up for the good players but, in my experience, that's certainly not true with the Ealing members.

All the sections, young and old, good or bad, love the condition of the course, often bringing along their guests, which didn't happen four years ago. Membership and green fees have increased. Golf societies have also increased by just under 50% over the last two years, and the office is full of letters congratulating the greenstaff and course. I have no doubt that many clubs would enjoy this scenario.

Yet, the industry he works in seems negative and mostly dismissive of his methods. A lot of comments I have read seem to be scaremongering. Some have even suggested that the greens at Ealing will be 'lost' or 'die' in three years! Now that Greg has been the course manager for four years, and the greens are still improving, they have had to modify their prognoses to seven years!

Also, some of the information being given out is factually incorrect. A recent article in another turf publication by an agronomist, stated that the greens 'guestimated' height of cut was 3mm. I am not an expert but, surely, you don't guestimate a cutting height?

Greg uses tools such as an 'Accu-gauge' to bench set his height and then uses his prism gauge on a weekly basis to confirm the actual height of cut on the green. From his records, when the agronomist guestimated the height of cut, it was not 3mm, but 1.8mm instead!

Another example was when the same article suggested the greens looked a bit 'thin' and 'sandy'. This was after they had just been verti-cut and topdressed! As I have always said, I am no expert in turf management. However, I do feel that some of the press being given to this subject is sometimes blinkered. And that some greenkeepers/advisers feel threatened by this new way of greens management.

I also note that there is a lot of support for the more traditional practices and rightly so, but they can also be questioned. A few years ago, a golf course nearby reconstructed all 18 greens to USGA specification. They used a respected golf course construction company and agronomist, and turfed with traditional grasses, fescue and bent. During the first couple of years the greens were disappointing and members were told by the experts, that they needed more time. Five years down the line they have improved a little, but are nowhere near the standard of Ealing's old clay greens. And yet, when you look at what Wentworth are doing - reconstructing all 18 greens to be ready in ten months for The PGA in May - how do the experts explain that to the members who are still waiting for their greens to improve after five years?

So, could Greg's maintenance programme be the way forward? As we prepare for the winter, I will be thinking of the golfers who are already suffering playing to temporary greens, hitting off mats and tees that are so far forward, and then be grateful that our course manager is Greg Evans. A scratch golfer himself, who doesn't follow conventional practices, but still produces top quality playing surfaces in a sustainable manner. He is also someone who believes in putting the customer first, The Golfer!

I would welcome all of you to come and see for yourself.