0 Cutting Back the Years

Cutting Back the Years 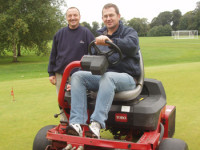 Age has proved no barrier to learning for a Reaseheath College trainee who has been recognised in a prestigious greenkeeping competition.

Dave Newton, 47, was selected from 3,000 trainee greenkeepers across the country to be one of two runners-up in the Toro Student Greenkeeper of the Year competition.

Formerly head herdsman at a dairy farm, Dave changed careers and gained NVQ levels 2 and 3 in sports turf at Reaseheath College in Nantwich, while working for Arrowe Park Golf Club in the Wirral.

Dave, who is married with a 16-year-old son, said: "I talked myself into a job at Arrowe Park and it's gone from there. I have always been fascinated by grass and when I took up golf I used to watch the lads cutting the grass and thought I would love to do that."

However, being an older student was daunting at first. "Initially I was very nervous and thought I would be the oldest one there but I soon found that I got on really well with the others and have made some good friends," he said.

"I love learning and getting qualifications can open up all sorts of opportunities. I have no regrets and my message to others is that you are never too old. Don't think that you've had it - go ahead and have a go!"

Senior lecturer in sports tuft at Reaseheath, Gareth Phillips, recommended Dave for the award. "Dave's NVQ level 3 portfolio was the best I have ever seen. He has been a superb student and thoroughly deserves his success," he said.

"Employers do not realise what they are missing out on if they discriminate by age."

Assistant parks manager for Wirral Borough Council, John Shipton, believes an individual's age is not as important as their experience and interests.

"We employ people from school leavers at 16 through to 65," he said. "We look at the person, what skills they have to offer, their qualifications and their interest in greenkeeping rather than their age.

"Municipal golf courses have an important role to play and well qualified staff are key to giving members of the public the high standards of course and facilities they expect," added John.

You can contact the GTC at the following address: