8 Cutting the cloth to fit

For all grass sports the end of season renovation work is of paramount importance in preparing the surface for the rigours of the following seasons play.

At Wolverhampton Wanderers FC, the preparations start early in March. Discussions take place on how the pitches have 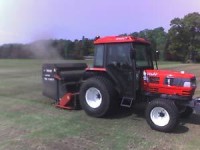 At Molineux we had suffered too; up until Christmas the pitch looked as good as it ever had going into the January/February period of play. Then with consecutive cup matches being drawn at home, we endured seven games in little over a month and lost nearly 50% of the grass cover on the pitch. As the temperatures remained low and the soil didn't get a chance to warm, grass recovery was almost non-existent.

All that said and done, the pitch held together well for games, and the early fears of a possible relay were allayed.

So in discussion with the Club Secretary, Terry and Wayne (the Groundsmen-left) and our consultants PSD, a specification and schedule was drawn up for the contractual works in May. Tenders were sent out and by the beginning of April, prices were back with the club for consideration. 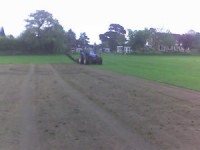 It was felt that we could undertake much of the work in house-leaving one pitch at the Compton training ground and the main pitch at Molineux to the successful contractor. 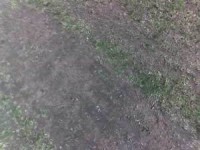 As with most clubs, Wolves work within strict financial budgets, the pitch receives a good budget for the renovations and seasonal maintenance but there isn't the money at present to reconstruct the pitch properly.

Over the last 14 years, goal areas have been reinforced with fibre sand even hand sown with Desso, small out field problem areas have been excavated and re-filled with newer root zone material and additional drains have been installed in certain areas both East to West and North to South across the pitch.

With the advent of machinery such as the Koro, the vegetation has been stripped off each May and the root zone ameliorated with further sand or rootzone nearly every season for the last ten years. The ability to 'turn over' the upper profile, creating air space and removing compaction certainly provides the newly sown grass with the best chance of 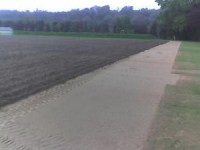 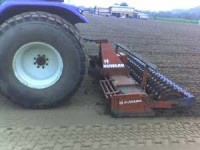 During inclement weather there are usually a few occasions when games are close to being called off. The club has invested in a rain cover system, which is worth its weight in gold; but even with this in place, heavy rain in the hour or two before a match can still waterlog the surface, very quickly bringing about a postponement.

With all of the above and more to consider the following works were decided upon for this 2006 renovation with the pitch contractor Derek Crane and the Wolves Groundstaff working in conjunction for much of the work to keep costs down to a minimum.

Once completed, 20 cubic metres of concentrated fibre rootzone was spread through the goal areas and one or two other areas of concern and this was worked into the surface with the power harrow and then stone raked again to attain our final levels. The fibre concentrate was used to provide some more strength to the root zone, during the latter stages of the season, when grass cover thins out. 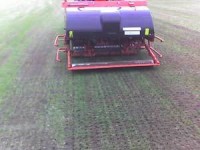 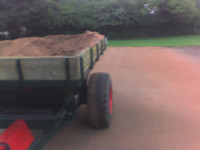 The seed was applied using a Blec seeder before a final light roll left the surface requiring some water-we didn't have to wait long before the heavens opened and we got yet another deluge. Unfortunately the thunderstorms kept coming and some days during the following week, rainwater was pouring off the prepared surface like a river, taking much of the surface seed with it.

Fortunately the Blec seeder had planted plenty of seed well below the immediate surface and this has come up very well. We just need to thin out clumped areas left by the heavy rain.

The work at the training ground commenced a week or so earlier than at the main ground. We had been in negotiation with the local school to renovate their four pitches while we did our own in-house. Due to us hiring the machinery locally and purchasing the materials directly ourselves, we were able to offer a couple of very reasonable and cost effective proposals. The school decided on the best works schedule and we set about scarifying and vertidraining the fields. 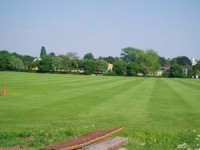 In total there were eight full size and academy pitches to renovate at the training ground. The full size youth team pitch had a similar remit to the Molineux pitch that we worked together with Derek Crane on. With the exception of this pitch, the rest were scarified, seeded, fertilised, seeded and top-dressed. 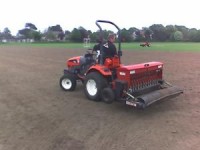 From a financial point of view we look to trim costs where we can, this year we had planned to Koro off two of the training ground pitches and turn them over, but decided that we could get one of the pitches through another season without too many issues and that money could therefore be saved.

The players are back for training in the last week of June, so it was vital that all of the work could be completed as quickly as possible.

We had booked renovation machinery from a local dealer well in advance of the start date, however when the day came the machinery didn't. A succession of phone calls didn't resolve the issue with the dealer and we appeared to have been left high and dry. Fortunately for us, because of the heavy rain and the inability to start renovations on other local fields, a local contractor was able to hire out his machinery to us for a few days. 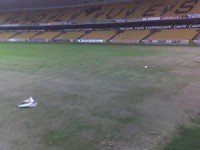 Terry, Wayne, Ken and I worked from day break until dusk to scarify and clean the surfaces, sow about 1500kg's of seed, apply over 2000 kg's of fertiliser and dolomitic limestone and spread 520 tonnes of approved drainage sand on all the pitches. 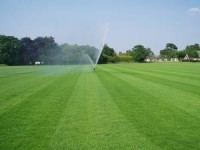 st team and reserve pitches. Although the rain hindered our progress to some degree, we managed to complete the training ground in just over a week. The continuing unsettled weather meant that the irrigation system, that we'd had re-commissioned remained unused.

Usually by May, soil temperatures are increasing sufficiently to see the seed chit and break the surface in about five days. However the air and soil temperatures remained cool and we waited about nine days before the seedlings finally emerged.

As the days have passed by, the better weather has arrived and the irrigation (despite a few teething problems) is in full swing now. The new seedlings are establishing nicely and by the time this article is published the players will no doubt be back in training.

The maintenance regime started with a couple of light rolls and then a cut with Honda Pro rotary mowers, once the seedlings had grown to about 35mm (nearly three weeks on from seeding!). Regular mowing with the Dennis mowers was then continued for a week, before it was felt that the mowing could continue with our John Deere five-gang fairway mower.

The rooting across the pitch is favourable at the moment, averaging around 150mm. The lads have also started verti-cutting the pitch weekly, to thin out some of the thicker patches of grass left as a consequence of the heavy rains after seeding. They are mowing most other days, maintaining a height of cut at 25mm. We've had one bout of leaf spot this summer and this was treated straight away with Chipco Green.

It's early days yet, but we're all encouraged with the performance, let's hope that the team can produce some more memorable performances as well.

The training ground also looks good and is standing up to the wear quite well. The players have now been back in training for just over a month. Unfortunately the school playing fields don't look their best, with the continuing drought. We have needed every available drop of water for the training ground pitches and there has been no spare for the top field. However these pitches are more level, and after a heavy downpour, drain far quicker than before. We believe that once the cooler weather arrives and the rain, these school pitches will recover quickly and look spectacular this winter-I'll keep you informed of their progress.