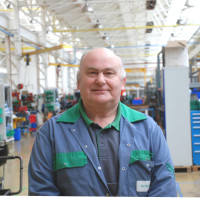 Test and Assembly engineer Dai Williams, who joined Ransomes Sims and Jefferies in 1959, retired on 9th April, after 50 years of dedicated and loyal service with Ipswich-based turf maintenance equipment manufacturer.

He joined the company on 31st March 1959 and because of his age, just 14 years and 11 months old, he worked initially in the Tinsmith's Shop at the Duke Street works, before beginning a five-year apprenticeship in September 1959. As an apprentice he was required to make his own tools which included measuring blocks, punches and various other items.

In 1964, after completing his apprenticeship he was seconded to the Forklift Truck assembly line and for the next four years was involved with the manufacture of electric flatbed trucks, compact tractors as well as building automatic lathes for Coopers of Coventry and electric motors for forklift trucks.

In 1966 as one of the 3,200 employees working for the company he moved to the current Nacton works, where he assembled electric pallet trucks, an operation that was undertaken single-handed. During the early 1970s he was involved with making ploughs, cultivator and sprayers for the Agricultural division, before moving to the Experimental department in New Works. By the mid-70s he was working in the burgeoning mower division, as a Test and Assembly engineer on hydraulically driven ride-on mowers and trailed gang mowers.

More recently he has worked on the Main Tractor line, building the company's renowned ride-on mowers, the Ransomes Highway, Parkway and Commander, stalwarts of the mowing world and used extensively by local councils and municipal authorities. Leading up to retirement and following a recent health scare he was undertaking light duties on this line.

Commenting on Dai's retirement, David Withers, Managing Director said, "It's people like Dai that are the backbone of this company; you only have to look at our annual long service awards, where those who receive their 20 year certificates are looked upon as just learning their trade! We are extremely grateful to Dai and the men and women like him, who have given such loyal service over the decades. 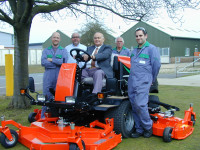 "The Ransomes name and Ipswich are synonymous and we continue to offer employment and career opportunities in this region. It's something that we are very proud of; even today we have people in senior managerial positions that began their careers as Ransomes apprentices. Long may it continue."

In his youth Dai was an accomplished local footballer and played for the Ransomes Sports and Social Club teams at minor and senior levels. He later played for Tattingstone, scoring two goals in a cup final. He also played darts for Castle Hill in a local league.

Dai lives in Ipswich with his wife of 44 years, Jean and they have two daughters, Anita and Theresa and four granddaughters, Amy, Kara, Lois and Leah. He is a keen gardener and grows his own vegetables at home.

His main plan for retirement is an extensive trip to America, with visits to Las Vegas, California and Palm Springs included in the itinerary.

"With a name like Dai you would expect me to have Welsh blood, but that's not right," he said. "There were two other David's in the section I joined early in my career, so to distinguish me from the other two, my mates called me Dai and it's stuck ever since.

"I've seen some massive changes here over the last 50 years, but I've thoroughly enjoyed my time. Probably the biggest difference is the number of people employed; back in the mid-60s over 3,000 and now just under 300, but we're still building quality machinery here in Ipswich and long may it continue."

More information is available at www.textron.com.