Looking at the main image you could be forgiven for thinking that it is one of those holiday snaps that get rolled out when guests call round; "The views were stunning and the wild flowers were everywhere ... etc. etc". It is, in fact, the home of Acton Scott Village Cricket Club as presented to the groundsman, Jamie Wrench, on 10th June!!!

Not for Jamie Wrench the countless hours of pre-season preparation, rolling and making ready for the start of the coming season. The little South Shropshire village cricket team seem to capture all that is quintessentially English about the game of cricket; playing the game for the love of the game.

The Club was formed on the 9th May 1996 by Richard Wilson (I don't believe it!) with the support of local people who wanted to simply enjoy playing cricket on Sunday afternoons with no league status aspirations. It started with just fourteen enthusiastic people, donations of £63 and a grant of £150 from the South Shropshire District Council. It now has about twenty-five regular playing members, ranging in age from early teens to late fifties.

2006 saw the tenth anniversary of the club's foundation which was recognised with a short film for BBC Shropshire TV on Sunday 20 August 2006 during the club's home game against Shrewsbury. 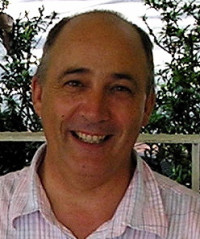 The ground presents a unique challenge for the would-be groundsman. Despite being at the top of a hill, enjoying fantastic views of The Long Mynd (Shropshire's highest point), it is very wet owing to the particular nature of the underlying Silurian clay beds that are found in this part of the country.

In addition, the land is subject to an Environmentally Sensitive Agreement which carries strict conditions about what forms of fertiliser and weed control are allowed. Also, the outfield cannot be cut until mid July to allow ground nesting birds an opportunity to breed.

The result is that, although some minor repairs can be carried out to the square during the winter months, preparation of the outfield and square has to take place in a very short period of time - in the middle of the playing season!

When Jamie, the club's Groundsman and Vice-Chairman, put these conditions to the experts at the IOG courses, they went pale. But the spirit that has taken England through untold rearguard actions against opposing Test sides continues to shine in the intrepid activities of the Acton Scott members!

At the end of the 2005 season, and armed only with a grass rake, a fork and a trailer loaded with £15,000 worth of high tech equipment provided by the ECB and Channel 4, the valiant amateurs scarified, aerated, seeded and topdressed the five wickets in an effort to reduce the springiness associated with their wickets.

Recent soil sample cores showed deep vertical root growth to about five inches, and no sign of the top of the core being detached from the soil, which had been responsible for the springy feel. This should, therefore, mean that greater compaction will be possible which, in turn, should result in firmer wickets.

Following further comprehensive work, carried out last autumn, the grass is now growing vertically rather than in a sideways direction and, after it had been cut, it was apparent that the growth was even.

There is no respite in the winter months either as a specially trained flock of sheep keep the outfield mown and fertilised and a hosepipe connected to a Land Rover's exhaust dissuade the moles from encroaching. Further aeration is accomplished by a parliament of genetically modified rooks that have been programmed to search for chafer grubs on the five pitches only - or so it seems!

Jamie takes up the story:

"We play all our away games in the first half of the season, because we aren't allowed onto our pitch until the middle of July - it's all a matter of delicate diplomacy with the local farmer. To be fair, this year we negotiated permission to work on the square from May onwards, but it's been a bit wet and we didn't get started till June. Hey ho!

Arriving at the field where the pitch will be, we begin the search for the square. It's roughly in the middle, of course, and you can tell approximately where it is because, for some reason there are a lot more daisies on the square than anywhere else, and the sheep don't seem to like them much. Somewhere among the daisies there are four nine-inch pieces of broom handle, painted white, hammered into the soil, marking the corners of the square. Surprisingly, only a few minutes on our hands and knees are required before we've found all four, and then we're on our way. 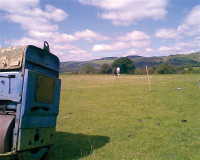 First task, removal of sheep poo and cow pats. Most will be picked up with the first pass of the rotary mower, but some are glued solid to the soil and need to be prised up with a grass rake. Once the Mountfield rotary has taken off the top, we can get to work with the cylinder mower, set to a height of ¾ inch (centimetres being a foreign language still in this part of the country). Despite the attention of the sheep, there's a remarkable amount of grass clippings harvested, which we drag to the edge of the field and kick around a bit. Then back to the middle for the first roll…

Ah, the trusty roller! It's an ex-local authority single roller, petrol driven (leaded, of course), once used to flatten tarmac on pavements as far as we know. Now it stands for nine months of the year under a tree on the far side of the field, exposed to wind and weather; and every year we fill it up with petrol, check the oil, offer up a quick prayer - and it starts with just a couple of yanks on the handle.

The ground is often very wet but, luckily, the recent dry weather means we've caught it at about 50% water content, perfect for rolling. We roll the square diagonally on the fast speed first, then slow. I went on a course, see, so I know that if you've only got one roller, fast equals a light roll, slow is heavy.
Over the next few weeks we roll it and mow it as much as we can and, if we are lucky, it won't rain too much or dry out too much. Our biggest problem is that without being able to scarify, spread loam and carry out proper maintenance to the square in the autumn we run the risk of a build up of thatch, and that will hardly produce a test wicket. 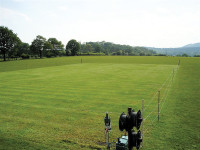 Until mid July, the outfield belongs to the sheep, and they do a pretty good job of keeping it short and green even if the droppings smell like - well, like sheep shit.

Come July, there's a flurry of activity; we borrow a topper and a seven ton roller from another local farmer and get to work on the outfield. Our pride and joy (apart from the roller) is our gang mower. Once we've got the outfield in shape we keep it cut twice a week, and there are few better ways of spending an hour than to drive seven miles round and round on a weekday afternoon, listening to the Test match and looking at one of the best views in the country.

We look forward to extending our hospitality to all those teams who played us at home in the first half of the season. On a Sunday afternoon at deep fine leg, dressed in my immaculate whites and confident that I'll not be required to field more than a couple of balls, I admire the view, curse the bowlers who scratch their run up marks into my field and the batsmen who scour out their middle and leg guard, and contemplate what a wonderful game cricket is.

Is it worth all the effort? Oh yes. It's a way of life. Resist change, drink warm beer, listen to the sound of leather on willow, the buzzing of bees and the gentle murmur of the countryside. And the teas are heaven."