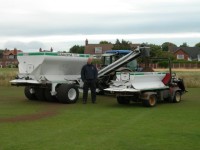 Improving turf condition is a priority for all golf course managers, and at Royal Liverpool Golf Club, home of the Open in 2006, Links Manager Craig Gilholm is no exception.

He has recently purchased a Dakota 440 topdresser from Campey Turfcare to bring the fairways up to the high standards for which the greens and tees are already renowned. This topdresser, exclusively supplied by Campey, uses a rear spinner deck to spread material to 9m width and can cover a fairway in four passes.

"The standards are higher than ever these days," says Craig. "We also have a Dakota 410, but the 440 holds over 6 tonnes of material, which we need to topdress the larger areas."

He plans to topdress regularly, increasing to four or five times a year on the fairways which are showing more wear.

"Topdressing with the Dakota 440 will help encourage the finer grasses and will lead to a far superior playing surface," Craig says. "It is also versatile as it can take attachments such as a floating box scraper and drainage trench back filling hopper suitable for refilling bunkers."

One of the oldest links courses in the country, Royal Liverpool's position on the coast and its sand base dictates Craig's topdressing programme, as he explains: "There is a high proportion of sand in the ground already, so we use a sand/soil mix to top-dress the fairways as there are few existing nutrients. The fairways do wear quite a bit due to their sandy nature, and adding a richer product stimulates a fuller grass sward."

The Dakota comes with a finger tip control box, needing no second operator. "It is a one man operation topdresser, It's easy to alter the rate of application by adjusting it from the driver's seat."

Craig used Dakota topdressers at his previous club and insists that they are the best machine for the job. He has also built up a good relationship with Campey Turfcare, purchasing a range of equipment from the company.

"There is no reason to go anywhere else - Campey is a top dealer and the Dakota is the best topdresser," he says.