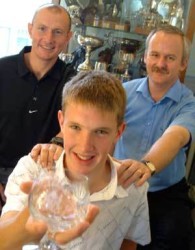 Daniel McLaren, 16, from Hockley Heath near Solihull, who thought that he would never find a path in life, took the apprenticeship through Zenith Apprenticeships, the work-based training arm of Warwickshire College.

Having been awarded the Zenith Apprentice of the Year award for Greenkeeping, he began an NVQ in Environmental Conservation last month. Daniel, who had always loved golf and gardening, was encouraged to study greenkeeping at NVQ level 2, which is funded by the Learning and Skills Council Coventry & Warwickshire.

Zenith Apprenticeships suggested Daniel became an apprentice, so he approached Andy Smith, manager of Shirley Golf Course who took him on to work four days a week, with a day spent at college where he learnt grass types, irrigation, scarifying and aerating.

One day Daniel plans to work overseas as a golf course manager himself, and Andy has encouraged him to focus on irrigation, which is vital knowledge for those wishing to work in hot climates.
"I'm so grateful to Andy for all the effort he put into my career - I wouldn't be where I was without Andy's support. I would probably be in a job I hate going nowhere," said Daniel.

When Shirley Golf Club heard that Daniel had won the Zenith Apprentice of the Year award for Greenkeeping, in order to recognise and reward Daniel's dedication and efforts, the club showered Daniel with an array of golf-related presents.

Andy, who thinks that apprenticeships are intrinsically valuable, has actively nurtured Daniel's aspirations from the start and encouraged him to think about his future.

"I know that my apprentices will not necessarily work with me forever, but I think it is imperative that we support students like Daniel for the sake of the industry. Attending Warwickshire College enables the student to get a good underpinning of greenkeeping, which is essential to really progress a career," he said.

Work-based learning assessor Rosemary Hughes liaises between Andy and Daniel, providing support and regular assessment to help both parties get the most out of the apprenticeship. Andy says that Rosemary has always kept in touch and that both he and Rosemary had put a lot into making Daniel's dreams come true.

For more information on apprenticeships at Warwickshire College, freephone 0800 783 67 67 or email enquiries@warkscol.ac.uk