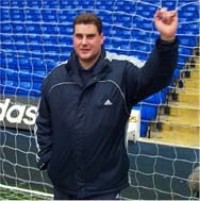 The training facility at Chigwell saw the construction of three root zone pitches in 1998, which provide the first team squad with top quality surfaces to train on.

We are currently mowing these pitches three times per week using a five unit fairways mower and also a 36" Ransomes Mastiff, dependant on the weather, usage and time. All of the training ground pitches are cut at 28mm.

At the end of last season, the No1 pitch was the first to be stripped off using the Koro Topmaker. I felt that as the pitches were three years old and the Poa was increasing rapidly in the sward, that implementing a three-year cycle of Koro renovation is of huge benefit to the way that these pitches will perform through future seasons. With the grass taken away, I spread sixty tonnes of sand across the pitch and then solid tined to a depth of 90mm (3 ½"), the sand was then brushed into the holes prior to over seeding with 280kgs of Advanta MM60, which is a 100% Rye mix. The Blec Star seeder was used to over sow, but in hindsight I should have combined this with the Charterhouse disc seeder as the seed didn't seem to be in deep enough and struggled to emerge in a tight existing root zone medium.

Fortunately, the manager Glen Hoddle was very understanding, using the other available pitches, until I was happy to let him and the squad back on during the pre-season training. We had started work on May 20th but had to wait until August 1st before I was confident the grass sward was mature enough to cope with the next eight months of wear.

I still found it difficult to establish the grass properly in some areas of the pitch and despite the applications of 12.0.9 used since seeding, found a one off feed of 20.10.10 helped me out of trouble!

Pitches 2 and 3 were more traditionally scarified, with the use of an Amazone flail mounted machine. Again both these pitches were sand dressed with 60 tonnes of an approved Leighton Buzzard sand, solid tined, brushed and seeded.

Due to the mild autumn there have been incidences of leaf spot and fusarium, mostly though on the Poa so to date the pitches have been sprayed twice, once each with Rovral Green and Rimidin. I also had the pitches sprayed with Carbendazene to eradicate the worms- for a while at least!

Apart from the three top pitches we have a further three indigenous soil pitches on the bottom field. These pitches sit on an old landfill site and are predominately heavy clay. There is also a lot of rubble and rubbish under the surface of this field, which makes it impossible to do any multi coring and difficult for verti draining. These bottom pitches are used as a training facility for our youth teams during the week, but then double up as match pitches at the weekend for the Academy.

We are leasing some additional pitches from Myddleton House in Enfield. There are four full size pitches and two intermediary pitches here that are looked after 'in house', although we help provide additional machinery to their staff if required. This venue provides us with good stopgap facilities, while the club continues its negotiations for a new training ground/Academy facility that will hopefully be built in the not too distant future.

Our three bottom pitches are fertilised on a six to eight week basis through the winter, using a 4.0.8 feed to strengthen the plant walls and help the grass to recover from play. As aeration is limited on the bottom field, I foresee a long hard winter of hand divoting and forking for the 'team of six', which includes me!

The sand based pitches at the top however are holding up and should, despite their late establishment, play very well this winter.